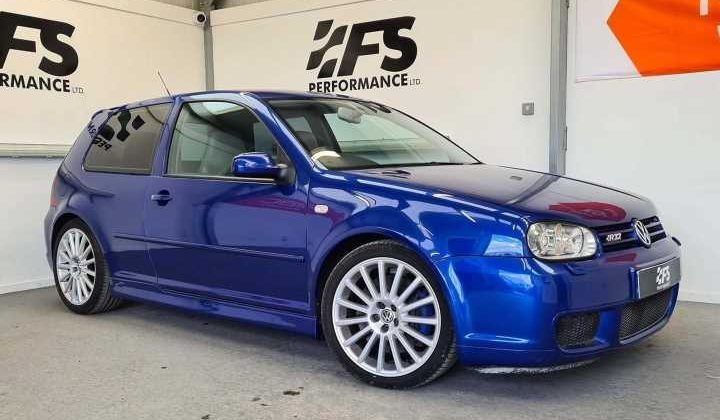 It's been another busy week on planet PH. These are the cars we couldn't stop thinking about…

What a topsy turvy week it's been for Volkswagen. On the one hand, both Golf GTI Clubsport and R sound like they'll be corkers, with price tags to trouble direct rivals. And on the other, VW has cancelled all motorsport activity, having just this October rolled out Romain Dumas to parrot the 'motorsport and production benefit from each other' line. Odd. And sad, in truth, given the success enjoyed on circuit and stage by the brand.

Still, those bits of news were all the excuse I needed to draw attention to one of my favourite VWs. (It would have been an XL1, but there aren't any for sale.) The Mk4 R32 is, in truth, all that used to be bad about the all-wheel drive Golfs – heavy, aloof, thirsty – and yet, with that look and that V6, I've been fond of it for a very long time. Seems the market now is, too, prizing this R32 above even its Mk5 successor.

UK cars with five-figure mileages of either generation now start at £10k, with this 2003, manual three-door on offer at £12,950 with 76k. Those willing to accept a private sale and a few more miles could get a Mk6 for the same money – that's how collectible the Mk4 is. Me? Given VW's current trajectory towards electromobility, that V6 powering a forklift would have appeal; in a Golf this handsome I can definitely see the attraction.
MB

In the UK, this generation of Integra Type R doesn't enjoy quite the same level of reverence as the original DC2. Which is understandable, as it was never officially sold here and is commonly regarded as not quite as magnificent to drive. However, being mildly less awesome than its predecessor still made the DC5 pretty sensational, and a two-year stint as Team Halfords' BTCC winning racer did the Integra's rep over here no harm at all.

That fact meant that a fair few were imported to the UK, along with all the super special Imprezas and Evos of the early 2000s, a practice that continues to this day. No, really – this DC5 is a fresh import from Japan, having lived every day in its homeland since being built in 2001.

Moreover, despite being 20 years old next year and showing 170,000 kilometres on the dial, it hardly looks half that: the engine bay is immaculate, the Championship White paintwork seemingly flawless – even the gorgeous red Recaros are in one piece. As far as can be told from the ad, it seems a real gem. Hopefully it'll turn 20 doing what Integras have done brilliantly for a quarter of a century – sticking a great big grin on its driver's face.
NC

Dan's love affair with his Alpine A110 is easy to understand; a car that rides and steers so well on challenging British roads was always going to be a star. As he explained in a recent feature, it’s an overachiever on so many levels, exceeding expectations in its most basic form. The same cannot be said for another compact sports car of recent times, the Alfa Romeo 4C, which was introduced with much the same promise – without ever quite living up to it. But while the reviews are mixed, it was most definitely not a failure. There’s plenty to like in Alfa’s mini 8C.

Weird spotted headlights of the pre-facelift car aside, the 4C remains a stunner. It goes well enough, too, with a punchy turbocharged four-cylinder, and on the right road, it handles sweetly. Sure, the steering doesn’t deliver the level of feedback you might expect from an unassisted rack, but there’s no denying the physical merits of such a small, 895kg (dry) sports car.

It's genuinely agile, too, even if it never ebbs and flows with a road like the A110. That foible was hard to ignore when they were new and arguably overpriced, but now, when this one’s up for hot hatch money, I can easily get over it.
SS