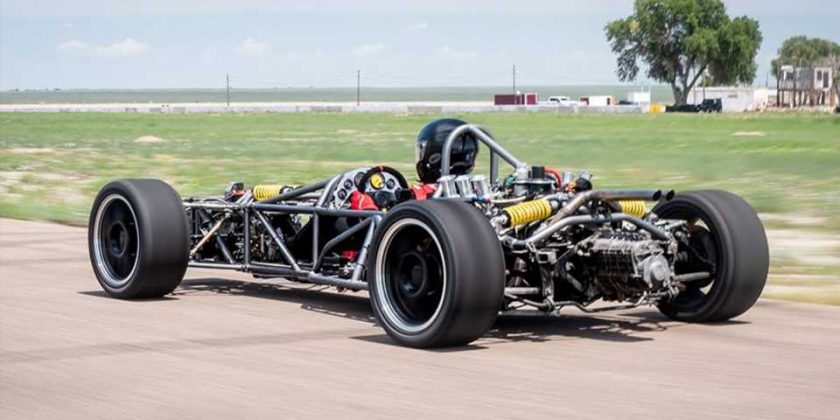 One man’s junk Porsche Boxster is another man’s home-built, F1-inspired track car. Wesley Kagan wanted to make his own 1960s-style Formula One racer—he was particularly inspired by Jim Clark’s 1967 Lotus 49 designed by Colin Chapman. Clark won on its first race, and it was the same car that drove him to the last win of his career in 1968. But while real vintage F1 cars are six-figure collectibles, you can get the same open-wheel experience for a hell of a lot cheaper if you’re willing to go the DIY route.

To make his dream a reality, Kagan needed a donor car with a rear-mounted engine as a base for the project. In his build explanation video, he talks about searching online for the cheapest running Porsche Boxster he could find, eventually finding a $2,500 example that had a good flat-six heart capable of pumping out decent power.

The Porsche donated its engine, transmission, steering rack, and many other parts to Kagan’s custom-fabricated tube-frame chassis. Slowly but surely, the car started taking shape into a narrow-bodied, naked, 300 horsepower race car with pushrod suspension weighing less than 1,100 pounds. The car looks like a one-seater Ariel Atom sucking in its gut. With the car’s power-to-weight-ratio, it probably drives like one too.

Now, the car is not 100 percent finished, but for the most part, the Boxster F1 works. It drives well enough to get around public roads and a track (the legality of the former is… an open question.)

In his follow up video Kagan goes a little more in-depth on specific areas the internet wanted to learn more. What we see is exactly how much thinking and problem solving has gone into building this car. Anywhere Kagan points to features an adapted component from a completely different vehicle or fabricated parts made to fit.

For example, the Porsche’s shifter box was too wide to install between the seat and the side of the car. So Kagan took the design and copied it using aluminum but making it ever so slightly narrower to fit perfectly in the position he wanted. The floor-mounted pedal design was taken from a Wilwood brake master cylinder kit. The throttle position sensor is from a Jeep Wrangler. It uses a stacked radiator set-up in the front with a gap in between to allow enough to allow external air to pass through. The gauge cluster is designed around the steering wheel. However, as Kagan explains, that needs to be readdressed to improve instrument visibility.

Kagan ends the video announcing plans to film the car with its body panels and then going back to the track to set some hot laps with the car fully suited up.

This is another example of someone finally deciding to do something about that nagging idea lodged in their head. It makes me feel guilty about not wrenching on my projects this week.