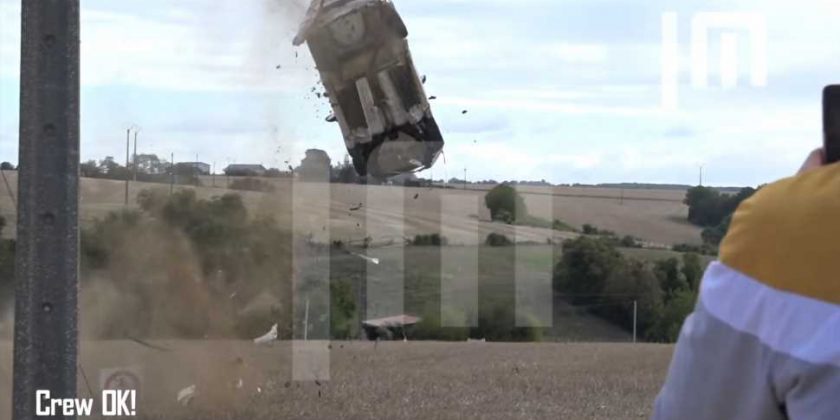 Want to see just how far motorsport safety has really come? Take a look at this incredible crash from the 2020 Rallye Coeur de France, and marvel at a Ford Fiesta nearly getting launched into orbit.

JMvideo captured a highlight reel of the action from Coeur de France, including everything from to Alpines to Citroëns and Volkswagens and even a Porsche 911. It’s a joy.

(This highlight reel should start right at the big crash, but if it doesn’t, pay attention to about the 3:10 mark.)

There’s one crash that doesn’t just stand out in the video, but stands out in life as well. As in, this has to be one of the most incredible crashes I’ve seen to date. A Ford Fiesta locks up its brakes heading into a corner on the Savigny special stage, but doesn’t slow down enough to avoid getting absolutely launched off of a berm opposite the corner.

The car is hurled end-over-end into a bit of a cartwheel (…crashwheel?), tossing its bumper far away in the process. Amazingly, no one inside was seriously injured. They were probably a bit sore the next day and should definitely ask a doctor if they might’ve gotten a concussion from that one, but JMvideo said the crew was just fine.

“I would never have put it if the crew were injured,” JMvideo explained in the comments, as translated by Google. (Good on them.)

The Fiesta wasn’t the only one caught out by that corner. A Renault at about 2:12 in the video also locks up its brakes and hits that same berm. However, that driver was able to slow down much more before the crash, thus avoiding the air time.

So, have we mentioned that Thank Your Cage Builder Day should be an internationally recognized holiday? Because it definitely should.