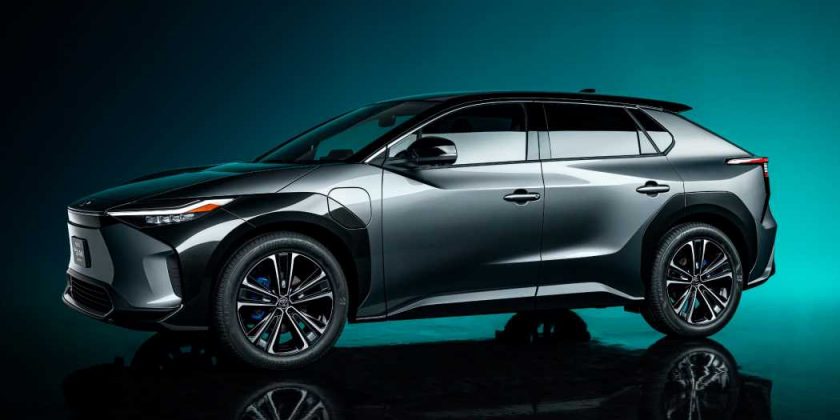 It’s been a long time coming, but we’re finally getting our first look at Toyota’s electric future. The Toyota bZ4X Concept is the first of seven dedicated battery-electric vehicles that will live under the new “bZ” moniker, and while some details such as its range, battery size, and charging capabilities have not been disclosed, it represents an important stepping stone for Toyota’s future.

If you think the concept’s name sounds like a computer password, don’t be fooled—”bZ” stands for Beyond Zero, and we’ll be seeing that badge across multiple models in the next few years, much like how “GR” (Gazoo Racing) is now included in the names of the Supra and 86 sports cars.

If this concept looks more like a production vehicle to you, you’re not alone. The bZ4X is a dead ringer for the salable model slated to be produced in Japan and China and sold globally—including here in the U.S.—next year.

What is the Toyota bZ4X Concept?

The Toyota bZ4X will be the first vehicle based on Toyota’s new e-TNGA platform. It looks like the bZ4X, which was revealed at the Shanghai auto show, is about the size of Toyota’s subcompact C-HR crossover. The bZ4X also is the first fully electrified vehicle to be produced under the expanded venture between Toyota and Subaru, as the bZ4X is based on Toyota’s electric architecture using Subaru’s marvelous all-wheel-drive capabilities.

The long wheelbase and short overhangs give the Toyota bZ4X distinctive proportions. From the front, the fascia adapts sporty lines and air vents, while a grille-less nose quickly identifies it as an electric vehicle. The slim headlights are flanked by a black, shiny trim that expands to the wheel arches, giving the bZ4X a rugged yet futuristic look. Its profile adapts swift character lines that flow back, while its high beltline and rear spoiler add to that sporty design. Out back, the rear taillights are connected by a thin LED strip, borrowing a flourish from the also-small Lexus UX.

Speaking of, overall, the bZ4X looks more like a Lexus than a Toyota, as its exterior design mixes upscale lines with sporty details.

Toyota didn’t release any performance or range numbers, we expect the bZ4X to have between 250 to 300 miles of range, which is on par with other “long-range” competitors such as the Chevrolet Bolt EUV, Hyundai Ioniq 5, Volkswagen ID4 and Ford Mustang Mach-E.

Wait, This is a Toyota Inside?

Like the outside, the inside feels luxurious and modern, and it’s unlike any Toyota interior we’ve seen. The capacitive climate-control buttons and the big infotainment screen help with that upscale look, but the premium gray fabric that covers the dashboard, as well as the three-tone interior are different from what we’ve seen in the past from Toyota. A smaller screen takes care of all the instrument panel duties, and sits right in front of the driver but further back on the dashboard, giving a sense of space in the cabin.

A rotary gear selector replaces the traditional shifter and sits in the middle of the bridge-like center console, which is similar to that in the new Sienna minivan.

The lack of a drivetrain hump makes the rear seat feel more spacious, as the floor is completely flat. Depending on the trim, back seat passengers get USB ports, dedicated air vents, and heated seats. A tiny window located on the C-pillar will also help backseat passengers feel less constrained, though we doubt it’ll help the driver’s outward visibility much.

Bob Carter, Toyota’s executive vice president of sales, has said in the past that he wants Toyota to be “the Macy’s department store of powertrains,” offering a department store’s worth of choice in internal combustion engines, hybrids, plug-in hybrids, battery electrics, and hydrogen fuel-cell electrics. The bZ4X fills in the battery electric niche, as the automaker doesn’t have any EVs in its U.S. lineup currently. Until now, Toyota has dedicated its finite battery resources to hybrids, believing doing so generates a bigger environmental impact because rather than a few thousand EVs replacing a few thousand gas cars, several million hybrids can replace gas cars—and the cumulative fuel economy benefit of all those hybrids is far, far greater than that of a much smaller number of electrics. But Toyota is gearing up for more electrification, so clearly it’s found a new line of thinking.

Expect sedans and more crossovers to join the bZ electric umbrella in the future. Toyota has confirmed 15 battery-electric vehicles, seven of which will be part of the bZ group, by 2025. The automaker also confirmed for the first time that it plans to bring hybrid and battery-electric powertrains to its truck lineup.

We hope to learn more about the Toyota bZ4X in the not-so-distant future. Stay tuned.