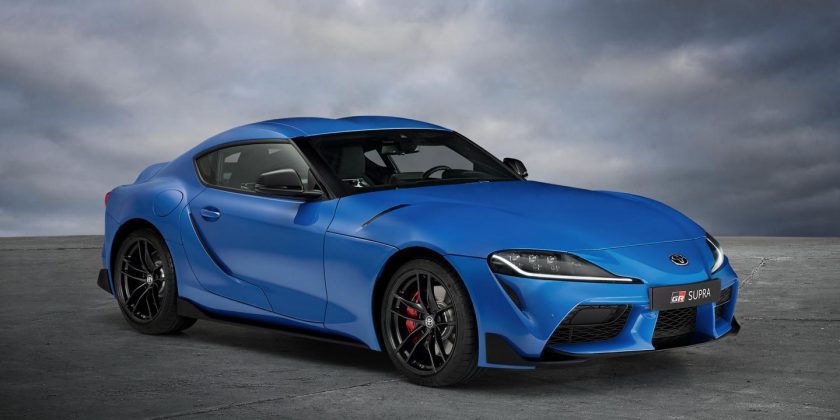 If you’ve been wondering where all the special editions for the Supra are, given how prodigious the supply was with the GT86, may we turn your attention to the new GR Supra Jarama Racetrack Edition? Honouring the circuit that Toyota held its European Supra launch on, the Supra special will be produced in just 90 units as a nod to the A90 generation, with each getting a bespoke look inside and out, and using the 3.0-litre straight-six engine. Toyota reckons the Jarama will be a “true collectors’ item” – something it said for many of those limited-run GT86s. Clearly, they sell.

While this Supra doesn’t receive any mechanical upgrades for its 340hp engine, it does come finished in Horizon Blue paintwork with black accents, creating a look that mimics the GT86 Blue Edition. Probably no coincidence. The theme’s maintained with 19-inch alloy wheels finished in black and red brake calipers, while inside, there’s black Alcantara contrasted against blue stitching. It’s nice, if not really that different from the series run model.

Of course, these Toyota special editions have always been as much about bundling kit into a package as they have been unique looks. This Jarama Racetrack Edition duly delivers on that front, with extras like carbonfibre trim and the top-grade infotainment system, packaged into an 8.8-inch touchscreen, with more standard driving assistance tech as well. You also get a nice plaque to signify the edition’s rarity with a circuit map embedded, which to Toyota performance fans probably accounts for more desirability than all of those other features.

And count it must, because the car – which has at first been announced for Europe – is on sale for €85,995, about £74k, or close to £20k more than the regular A90 six-pot. Yep. Toyota UK connfirmed to PH that the car will come to Britain, but that pricing here is TBC. Whatever the number, don't expect examples to be hanging around long; the GT86 specials that came to Britain with their own inflated list prices were popular enough. That said, the UK did have a pretty big appetite for the boxer model. If this new Supra variant tells us anything, it’s that the incoming GT86 replacement will pick up where its predecessor left off.