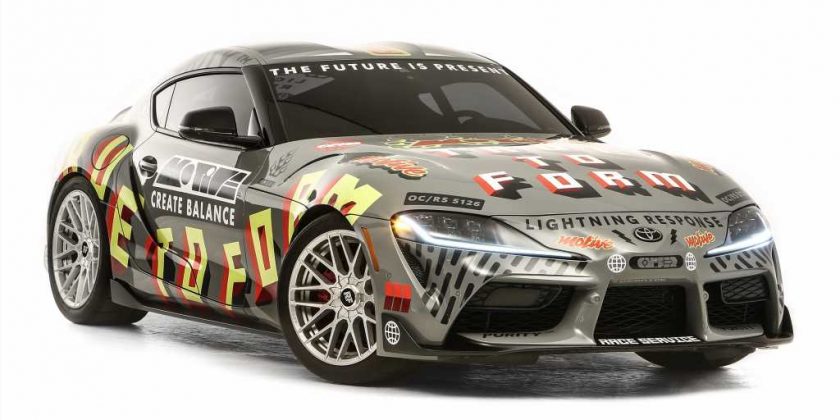 We’ve already seen some of the SEMA360 vehicle reveals and teasers, so you might already have heard that the SEMA aftermarket industry parts and culture event has transformed into a virtual show for 2020. Jeep has already teased an overland-ready Gladiator loaded up with Mopar parts, and Chevrolet pulled the wraps off its resto-modded K5 Blazer-E powered by a Bolt EV crate powertrain. Toyota’s SEMA360 GR Supras trade truckish purposefulness for a focus on drift performance, and aesthetics.

Two of the Supras are drift builds, but first let’s discuss the Ornamental Conifer GR Supra. As you can see, despite the name it’s not a Christmas-tree-themed build. Ornamental Conifer is the alter ego of Nicolai Sclater, a British artist who is at the art director of the Los Angeles design agency Race Service. They do much of their work on the flanks of cars, but a scan of Ornamental Conifer’s Instagram feed shows custom-painted surfboards, helmets, posters, and t-shirts.

The Turbulence Gray GR Supra that Sclater painted is clearly inspired by sponsor-laden motorsport liveries, but the extensive hand-painted lettering is also a nod to the classic art of sign painting—much of which captures attributes of the Supra that serves as its canvas. The paint is bold, but the gray is a subdued choice. This Supra is power by a 3.0-liter, turbocharged inline-six and wears bold RSE-M Forged Rotiform wheels.

The next build is a Formula D GR Supra done up by Ken Gushi Motorsports and GReddy Performance, and unlike the Ornamental Conifer build, this one is all business. And that business is winning: Many of the modifications here are intended to facilitate the un-sexy but important aspects of Formula D, like ease of repair and maintenance.

Not that aesthetics aren’t considered, or important—a Pandem Rocket Bunny wide body kit adds a lot of presence. But it’s also there to provide clearance for fatter rubber on the Rays Gram Lights 57DR wheels, and to allow for more extreme steering angles. Ken Gushi will field this No. 21 GR Supra at this year’s Formula Drift competitions in Dallas and Irwindale.

Stephan Papadakis’ Rockstar Energy Drink GR Supra is another formidable drift build, one that was notably documented on YouTube—videos that gave un an incredibly detailed look at how his team modified the B58 inline-six to produce a total of 1,033 horsepower and 908 lb-ft of torque. Monumental numbers, and also a collection of fascinating videos that’s worth catching up on. This Supra has already seen success with driver Frederic Asabo behind the wheel, who’s at the time of this writing in fifth place in the Formula D Pro standings with a couple of podium finishes so far.