In January 2018, pictures appeared on social media of the Haiyang Shan, one of the Chinese People’s Liberation Army Navy’s Type 072III-class landing ships, packing an experimental electromagnetic railgun in a huge turret on its bow. Now, the U.S. Intelligence Community reportedly believes this weapon, or one similar to it, will be operational onboard one of China’s warships by 2025.

CNBC was first to report on the U.S. intelligence analysis of the Chinese program on June 21, 2018. In March 2018, China’s state-run media had confirmed that the Haiyang Shan was conducting at-sea tests of the weapon, which had already gone through thousands of tests on land, but offered few specific details about its capabilities. China’s interest in electromagnetic weapons dates back at least to the 1980s, but it has been claiming to have made especially significant strides in recent years.

The official U.S. review reportedly says the Chinese electromagnetic cannon can hit targets nearly 125 miles away and fires projectiles at more than seven times the speed of sound. If accurate, this would mean the weapon would be able to strike targets out to its maximum range in a timeframe best measured in seconds.

This is significantly further than the maximum range of any modern naval guns and way faster than even advanced anti-ship and land-attack cruise missiles. It also means that it is capable of lobbing projectiles faster than the U.S. Navy’s own prototype design, which has yet to go to sea. A low-quality image of the Haiyang Shan, with its experimental railgun under wraps, in January 2018.

It’s the kind of potentially game-changing capability that has made the idea of a practical railgun attractive for navies and ground forces around the world for decades. Chinese ships with these weapons would be able to engage targets across a much broader area, potentially increasing the vectors of attack an enemy force at sea or on land might have to worry about and disrupting their plans.

The ships would also be more flexible and better able to quickly shift their attention to emerging threats and fleeting targets. In theory, electromagnetic guns are especially well suited to that latter category of time-sensitive strikes, since they are so hard to defend against, striking with almost no warning and giving an opponent little chance to move critical assets or evacuate from key sites.

Given the high speed of the projectiles they fire, the weapons could potentially take on other roles in the future, too. The U.S. Navy has envisioned its ships using railguns to shoot down manned and unmanned aircraft and incoming cruise and ballistic missiles. 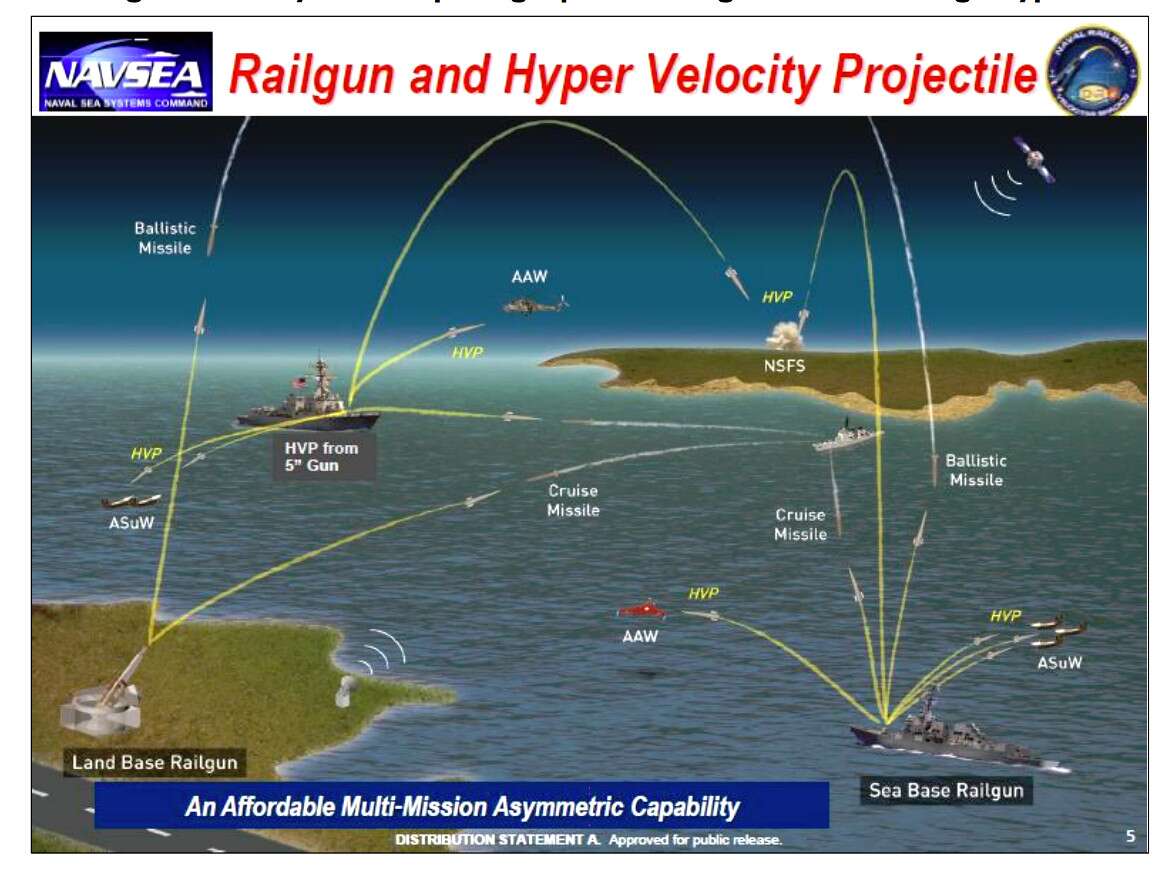 An official US Navy graphic showing the possible missions for the service’s future electromagnetic railguns and traditional weapons firing a similar, hyper-velocity projectile.

According to CNBC’s report, the rounds that the Chinese have been using cost approximately between $25,000 and $50,000 each. This would make them more expensive than standard naval gun shells, but cheaper than projectiles with GPS or other guidance packages that would work in those same weapons. No cannon firing typical ammunition of any kind would be able to match the railgun’s range though and this price point is significantly cheaper than any sub- or supersonic sea-launched cruise missile.

It’s also cheaper than the present price of the Navy’s experimental Hyper Velocity Projectile, or HVP, which has a unit cost of around $86,000. That service, together with the U.S. Army and Marine Corps, is hoping to use this round to get speeds of at least Mach 3 out of existing naval guns and ground-based howitzers. The maximum range of those weapons combined with the new ammunition still wouldn’t be anywhere near that of an actual railgun. 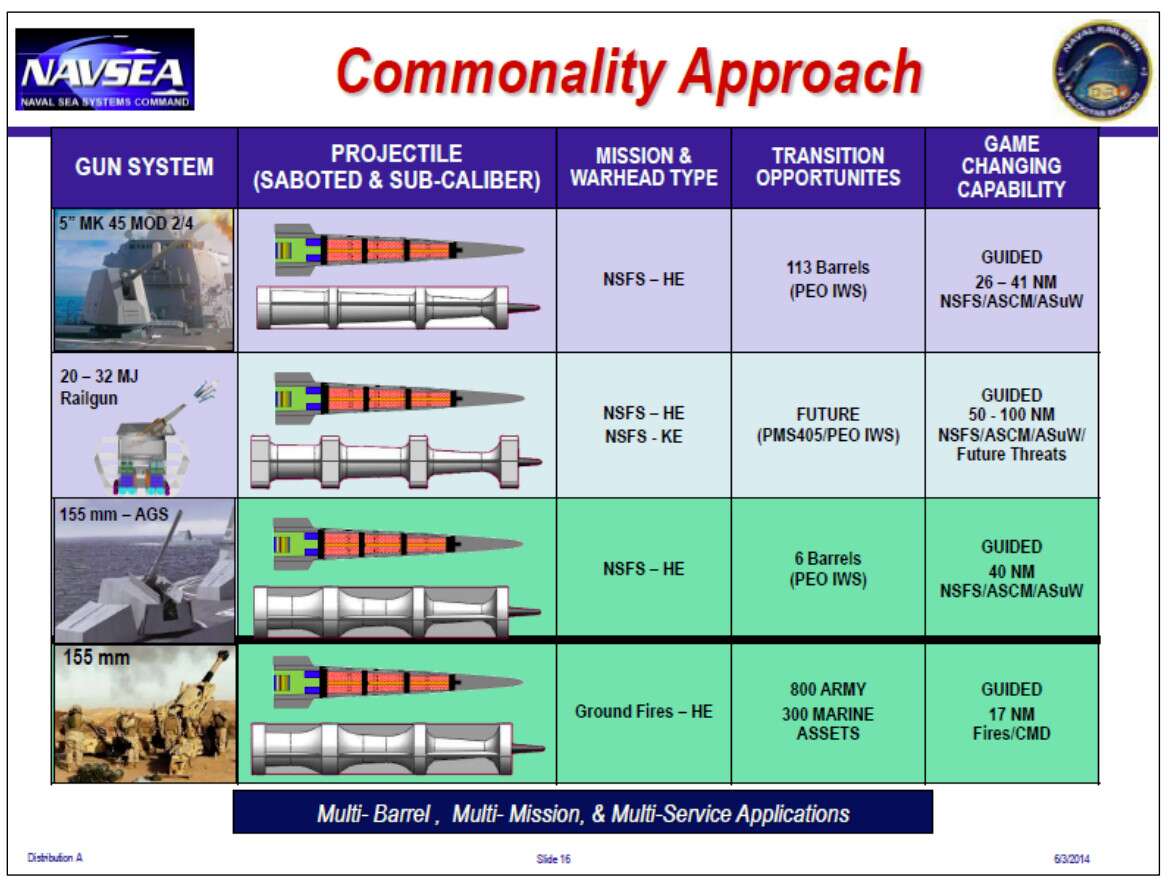 A look at the potential capabilities of the HVP combined with various existing guns compared to the speed and range an actual railgun offers.

The possibility that China will be fielding operational, railgun-armed ships within the next decade could push the Navy to redouble its own efforts to develop an electromagnetic weapon. At present, the service doesn’t expect to conduct its own at sea test until 2019 at the earliest.

The CNBC report does not say what ship or ships the Chinese plan to install the railgun on operationally. Historically, the limiting factors for railguns have been the immense power they require.

In turn, this requires additional space to house the elaborate electrical infrastructure and the equipment necessary to keep everything, including the weapon itself, cool during sustained firing. The experimental turret on the Haiyang Shan is already significantly bigger than any other large caliber gun mounts in the Chinese fleet. 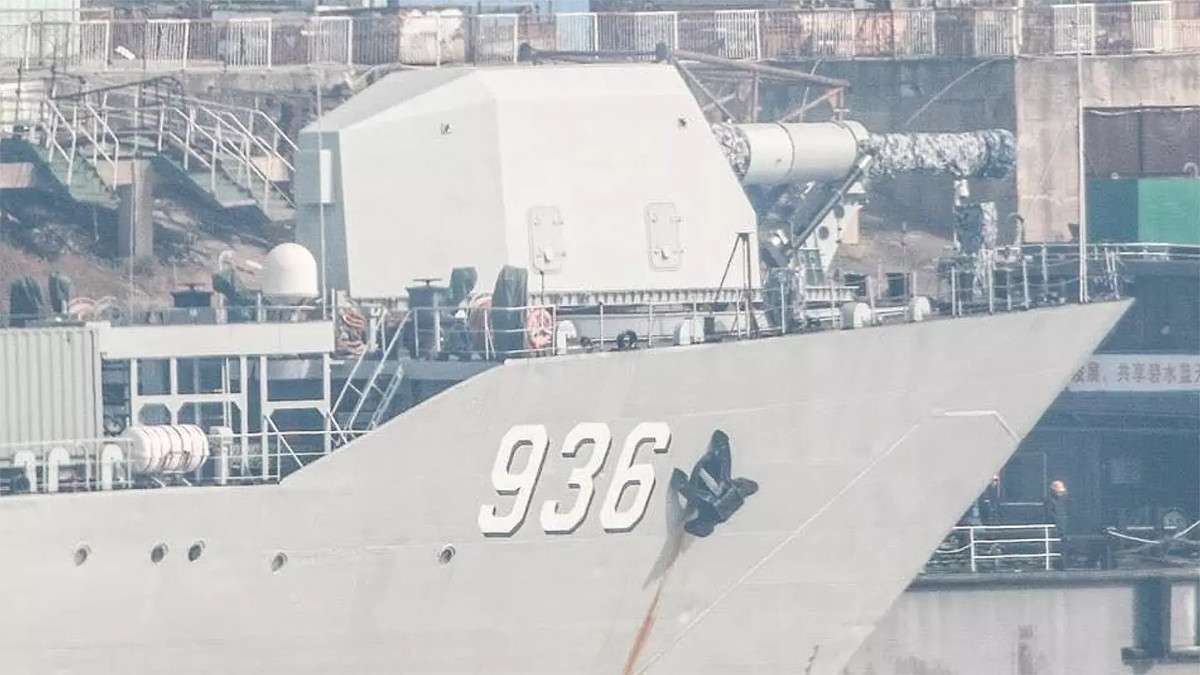 The huge turret housing the prototype railgun on the Haiyang Shan.

The range the railgun offers might allow China to consider deploying it operationally on an amphibious warfare vessel, such as the Type 072III, or even a logistics ship. A striking distance of more than 120 miles could put them out of range of most immediate counterattacks and they could also operate within the safety of a larger surface task force. Of course, The U.S. Navy, among others, is in the process of developing a hypersonic sea-launched anti-ship missile, called Sea Dragon, which would be able to quickly respond to the threat posed by a railgun equipped ship.

If China has truly developed a practical naval railgun, they could look to install additional examples, or derivatives thereof, in land-based mounts, as well. The U.S. Army is similarly developing its own electromagnetic cannon to support ground operations in a way it simply cannot do with traditional artillery and missile systems.

If the Chinese were to deploy these weapons on their various man-made outposts in the South China Sea, it would only further limit the ability of a potential opponent to operate in that region. If the system were at all mobile or air transportable it could be even more flexible in a ground-based role.

Whatever concepts of operation the Chinese might be considering, what is clear is that the country is rapidly expanding both the size and capability of its naval forces. The electromagnetic railgun project is itself tangential to reports of work on an electromagnetic aircraft catapult system that China could install in its next domestically produced aircraft carrier.

The expansion of the People’s Liberation Army Navy, or PLAN, goes far beyond flattops, though. China is building surface ships, submarines, and other craft at a prodigious rate. Our own Tyler Rogoway recently examined this build-up, writing:

“The fact that China has been able to realize such a massive expansion of its naval forces, both in terms of quality and quantity, prompts the big question: what will the  PLAN look like in another decade?

This haunting concern is one of the largest driving factors behind the U.S. Navy’s 355 ship fleet ambitions, which are going to be a major challenge to realize without a dramatic restructuring of its procurement priorities, existing fleet sustainment practices, and facilities management.

“With the Pentagon’s shift to ‘great power competition’ under Secretary Mattis, and with China now America’s top technological peer competitor, its ever-strengthening Navy is sure to cast a long shadow on the DoD’s list of priorities. But if things continue to go as they are, and with a catapult equipped Chinese aircraft carrier, and possibly a nuclear one as well, on the horizon, the days of America’s outright supremacy on and below the high-seas may be coming to an end.”

If the PLAN’s fleets actually include any significant number of railgun-equipped ships by 2025, as the U.S. intelligence assessment warns, it is even more likely that the era of near total United States naval supremacy in any prospective conflict, especially in Pacific Region, will have come to a close.