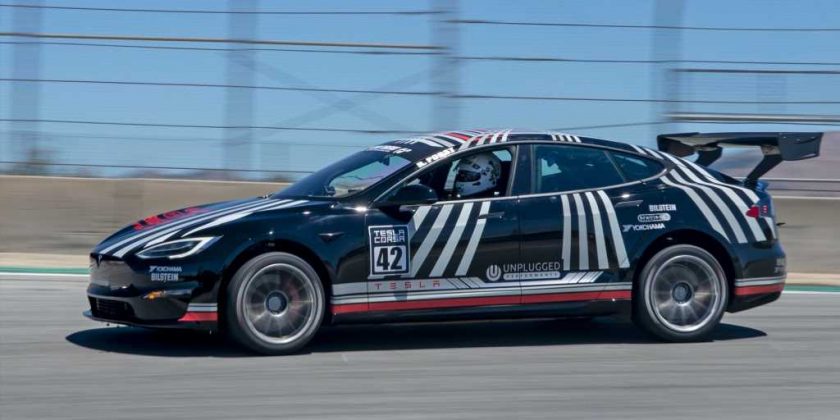 On June 10, 2021, Elon Musk formally kicked off deliveries of the 1,020-hp Tesla Model S Plaid. Approximately two days later, on June 12, Unplugged Performance debuted its race-prepped Model S Plaid that’s set to compete at the Pikes Peak International Hill Climb (with our resident pro racing driver, Randy Pobst, behind the wheel). You might remember that at last year’s race Pobst had a little moment and unexpectedly flew the Unplugged Performance Model 3 off the course. In a feat of determination, the Unplugged Performance team rebuilt the car overnight, and Pobst placed second in the exhibition class—and in a car with only half its horsepower!

Unplugged Performance’s Plaid racecar uses the stock powertrain from the top-line Model S. The interior is almost completely stripped out. After ditching items such as the car’s airbags, a center console, and door panels, Unplugged Performance fits this tri-motor Tesla with a roll cage and a racing seat with six-point racing belts. The body is stock except for a huge front splitter and a gigantic adjustable rear wing. Likewise, the Plaid racer retains its factory air springs, however, it employs custom Unplugged Performance/Bilstein dampers and a three-way adjustable rear anti-roll bar. The car rides on Yokohama Advan slicks on custom forged aluminum wheels. The so-called Pikes Plaid retains its stock brake calipers but subs in Unplugged Performance/PFC rotors. Air jacks? Yes ma’am. This thing is a real race car. Before the car gets to Colorado, the company intends to fit its front end with a set of fully adjustable upper controls arms, adjustable rear camber arms, and high-performance brake pads.

Unplugged Performance pulled the covers off of its Pikes Plaid racer at the third annual Hypercar Invitational happening at Weathertech Raceway Laguna Seca. The company finished the vehicle at 3:00 am on June 11, loaded it on a trailer, and then drove it straight to the track. In other words, the first time the completed car was ever driven was when it rolled straight out of its garage at Laguna Seca and onto the track’s racing surface—just the way it should be. Pikes Plaid is in full shake-down mode for the next two days. Pobst was able to silently pass several Lamborghinis, Porsches, and McLarens, before shattering the splitter on his second lap of the day.

What Is Unplugged Performance?

Ben Schaffer originally founded Bulletproof Automotive in 2000 to customize Japanese cars (Ben was even an extra in The Fast and The Furious). In 2013, the company moved into a building next to Tesla’s Hawthorne design studio in 2013—right next to SpaceX. Through that physical connection, Schaffer began talking to Tesla about modifying the automaker’s EVs for enthusiasts, which led to the birth of Unplugged Performance.

After falling in love with EVs as performance cars, Unplugged Performance quickly began building race cars, and in 2020 it brought a tuned Tesla Model 3 to Pikes Peak. The difference between last year’s Model 3 and this year’s Plaid?

“Power is the big one. This is more than four times the power we ended up racing last year. Unintentionally so,” Schaffer said. Obviously, the Model S is heavier than the Model 3, however, “the battery pack and the cooling systems are much better.”

Illustrating this point, Schaffer points out that as the state of charge decreased in the Model 3, “the power would go down in ratio to some degree.” The same does not hold true for the Unplugged Performance’s Pikes Plaid racer. At one point Pobst rolled into the pits at Laguna Seca with 34 percent charge remaining, only to announce the car feels as quick as it does with a full charge. “That’s a big difference.”