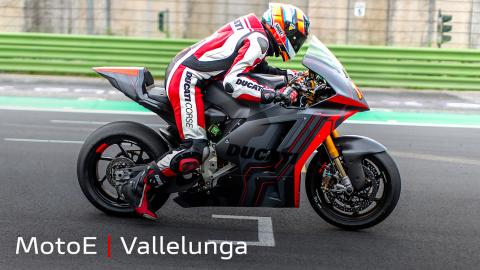 Ducati, as announced earlier, will be the sole supplier of electric racing motorcycles for the FIM MotoE racing series.

Ducati has been working on its first-ever all-electric motorcycle for quite a while. Back in December 2021, the company released the first set of images of the V21L prototype MotoE racer. Now, the Italian superbike manufacturer has released a short video of its V21L prototype doing hot laps around a race track, giving us a first glimpse of how the electric motorcycle looks and sounds.

While details of the upcoming electric motorcycle are not yet known, Ducati has confirmed that the development of the electric racing motorcycle could lead to the introduction of its first consumer electric bike. However, the Ducati V21L prototype will be aiming to beat the numbers of the Energica Ego Corsa, which came with 147 BHP / 220 Nm and had a top speed of 257 km/h during races.

Ducati, as announced earlier, will be the sole supplier of electric racing motorcycles for the FIM MotoE racing series.