VW and Audi turned diesel into a dirty word by inventing and applying so-called defeat devices across the range. In the process, they thoroughly tainted their brand image and alienated loyal customers stuck with cars whose ratings had dropped from desirable to dead stock within a few months. But unlike Porsche, which absorbed tens of thousands of windfall oil burning engines for almost ten years before pulling the plug in late September, Wolfsburg and Ingolstadt still need the diesel-drinkers to meet their CO2 targets.

Even though the diesel has been re-engineered in a hurry and now fully complies with the stringent EU6 temporary emission norm, the gun-shy punters still fear city driving bans and crippling resale values. That’s understandable yet tragic, because clean diesels are no longer fake news. Instead, the very best of them harm the environment less than gasoline hybrids while retaining their torque and consumption advantage in full. In terms of noise and tailpipe odor, however, Rudolf D’s combustion principle obviously no longer complies with the core values of high-tech trend-setters like Porsche.

Oliver Blume and his predecessor Matthias Müller were among the first CEOs to jump on the BEV bandwagon and to compile a radical phase-out strategy for the gas engine. They kicked off the Mission E program to create Germany’s first Tesla fighter, they were at one point close to replacing the best-selling Macan with a zero-emission model, and they set out to boost Porsche’s BEV penetration to 50 percent of the mix by 2023. 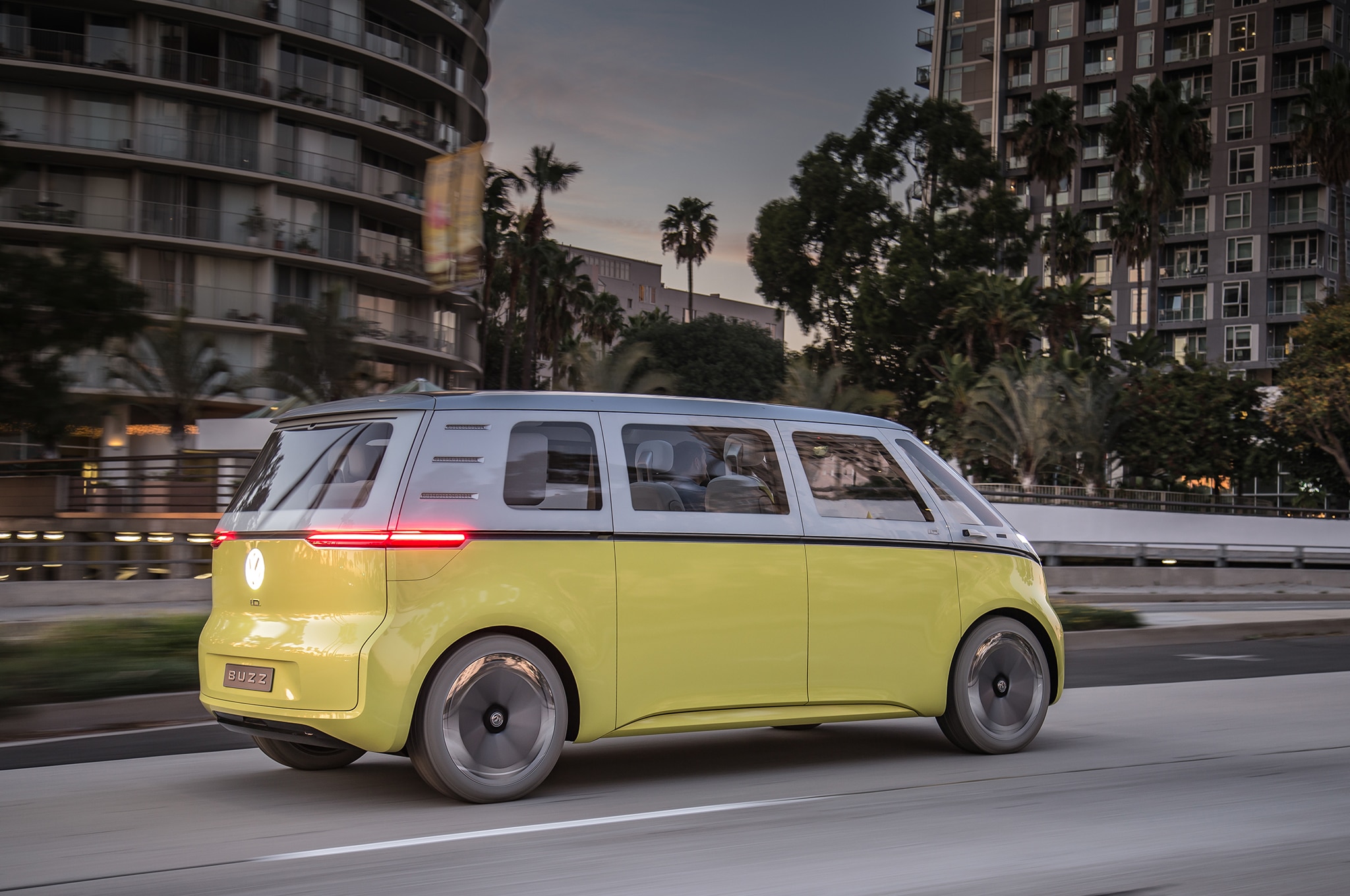 Thanks to the development of the mass market all-electric Volkswagen ID, which will be priced similar to a mid-line Golf and due next year, Porsche had carte blanche to convert its entire model range to plug-in and electric power by 2028. And by entire model range, one must include both sports cars, namely the replacements of the mid-engine 718 and the tenth-generation 911. While even the most detailed ten-year plan is at best safe for the next four to five years, it is little short of sensational that Porsche has its mindset focused on a brand-new all-electric 911, which will be offered in addition to the conventional 992 replacement.

Mission E aka J1 aka Taycan will come to market next autumn, and it won’t differ dramatically in appeal and appearance from the show car. The same applies to the CUV derivative, aka Cross Turismo, which has been penciled in for late 2020. Although it didn’t clinic particularly well in the US due to its low stance, we still don´t expect the real thing to be a proper SUV. Proportions are key for every Porsche, so a higher roofline is less likely than some token badland add-ons. A two-door coupé with a soft-top sidekick based on J1 would be the fanciest trick in the book, but financial risk and the need to control the increasingly complex portfolio doesn’t leave much room for experiments early on in the e-age. The supplier community suggests that major mid-cycle improvements are due for Taycan only four years after the start of production. The prime goal is bound to take out cost and put in more power, range, and durability. 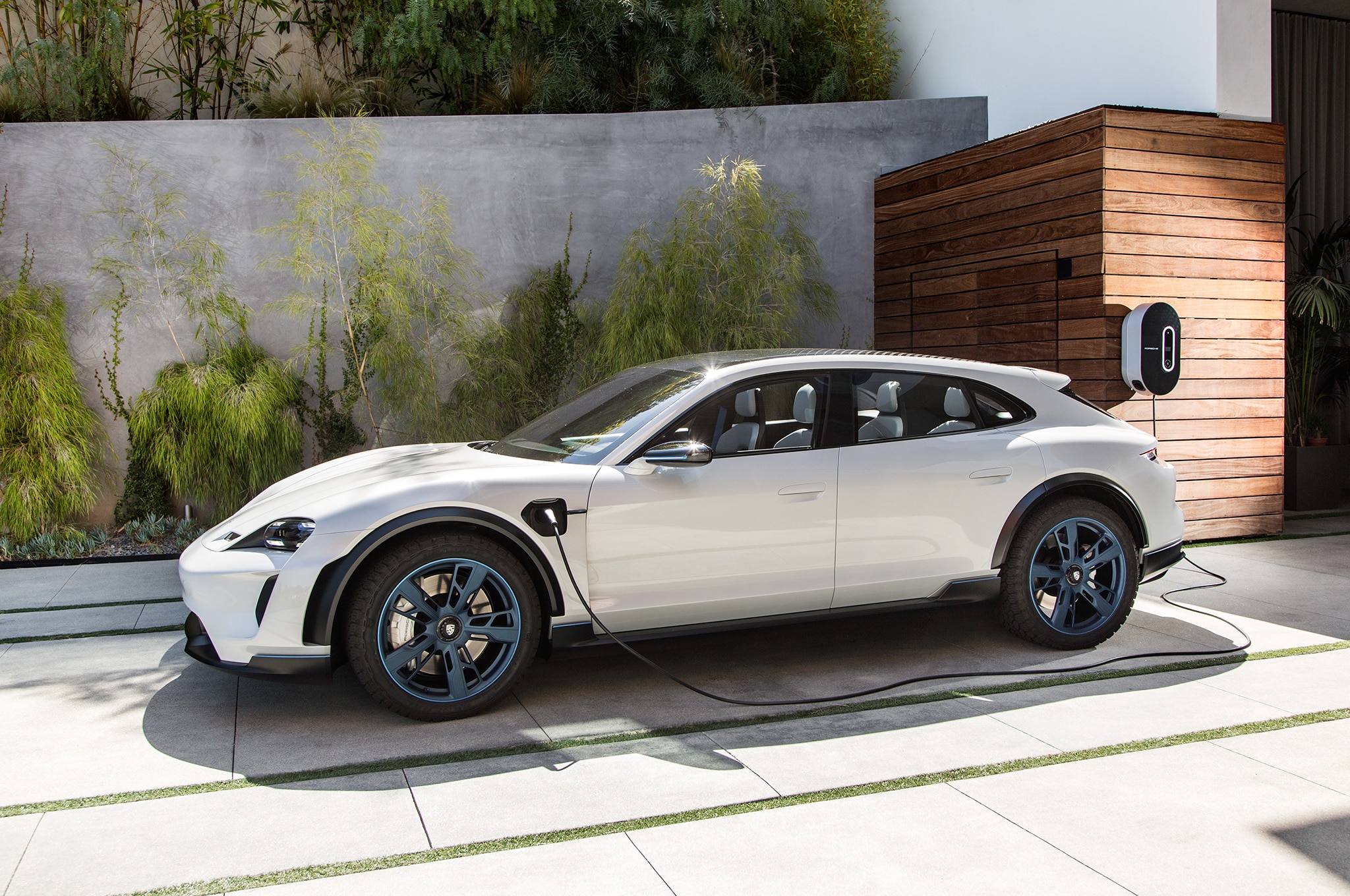 Instead of shifting the DNA from J1 straight to PPE (Premium Platform Electromobility), the platform co-developed with Audi, when Taycan expires at the end of 2026, Porsche is now allegedly determined to carry on with a heavily revised architecture codenamed, you guessed it, J2. If all goes according to plan, J2 will switch to solid state batteries which can do everything better than lithium ion cells—at a price.

There is no major change of body styles in the cards, but the aforementioned silent two-door GT always remains an option, even though Porsche should leave Audi and Bentley enough room for their J1 spin-offs. In terms of available powertrains, we still stand at a nominal 300/400/500 kW (402/536/670 hp) powered by a choice of LG Chem batteries rated at 80 and 95 kWh. All four wheels are driven via a two-speed transmission, the maximum torque one can play with from third upwards is 737 lb-ft, and as long as you don’t squeeze the energy cells out like a lemon (0-60 mph in 3.5 sec, 160 mph) the driving range should be in excess of 300 miles.

Even the self-described e-junkie Oliver Blume no longer intends to make the next Macan transfer from pump to plug over night. The plan is now to extend the life of the current model until 2024, which would almost certainly require a major facelift in 2021 or thereabout. Audi has already signaled that it will agree on a similar timing for the next Audi Q5, which the Macan III will again be twinned with.

The updated Macan, based on the familiar MLB matrix, and the all-new Macan BEV, derived from the brand-new PPE component set defined with Audi, are expected to come to market within six months of each other. Both offerings will likely overlap for about three years, if need be even longer. In case something goes terribly wrong in the future electric world, the new Macan could still ride on PPC, which is the combustion engine back-up of PPE.

An almost identical game plan applies to the full-size Cayenne, which is scheduled to undergo three iterations (including a coupé and two facelifts) before it finally retires in 2027. Ten years is a long life cycle for an SUV because you can only shed so much weight, and implementing improved aerodynamics that require sheet metal changes is even more difficult. That’s why the electric Cayenne—program E4, also part of the PPE family—must start as early as 2024 and extend the transition period to three or four years. No, there is no reward for guessing which pattern will be applied to the Panamera changeover. In an ideal world, Porsche would love to keep updating the current generation (G2) until it eventually bites the dust, but you probably cannot do this with an eleven-year old design—unless of course the unloved Sport Turismo gives way to the repeatedly hyped 929 coupé/cabrio which should consolidate demand. Right now though, a reskin (G3) in 2023 is more likely. Two years later, the all-electric Panamera G4 would be the fourth new Porsche never again to stop at a filling station—except for a coffee break.

What about the future sports cars in the making in the Weissach think tank, you ask? Same philosophy, but different timing, and for obvious reasons, different DNA. The 718 Cayman and Boxster launched in 2016 must soldier on until 2023 or 2024 without serious cosmetic operations, hybrid options, or AWD. The big bang follows in late 2022 when the battery-powered 983 is due to launch. This is a pure BEV, a total break with the past, sans alternative drivetrain option. Having said that, the outgoing combustion engine models—Boxster, Cayman, and Spyder—will be offered for at least twelve months alongside the high-tech newcomer. Apparently, the existing MMB platform can be upgraded to accommodate the totally different componentry. According to a senior engineer, there is thus no real need to proceed with the proposed all-new BEV matrix known as SPE, short for sports car platform electric. Dropping SPE would save approximately 25 percent of the cost-cutting target.

Although 983 is still in the final definition phase, we hear that there may be two coupé models, a Cayman replacement and a notably sportier high-performance derivative destined to slot in below the Carrera S/GTS. The second model would get bespoke coachwork inspired by the 918/919, and it would be priced in a similar bracket as the 911 turbo. While the Cayman E can reportedly be specced with one or two motors for a total of up to 536 hp, the Super E boasts three motors (two of them in the rear) for a peak output of 603 hp, sources say. The energy packs are said to deliver 100 and 125 kWh respectively. We expect a move to solid state accumulators from 2026 onwards, in combination with speed charging, ultra-quick battery regeneration, and Porsche-like repeat performance. 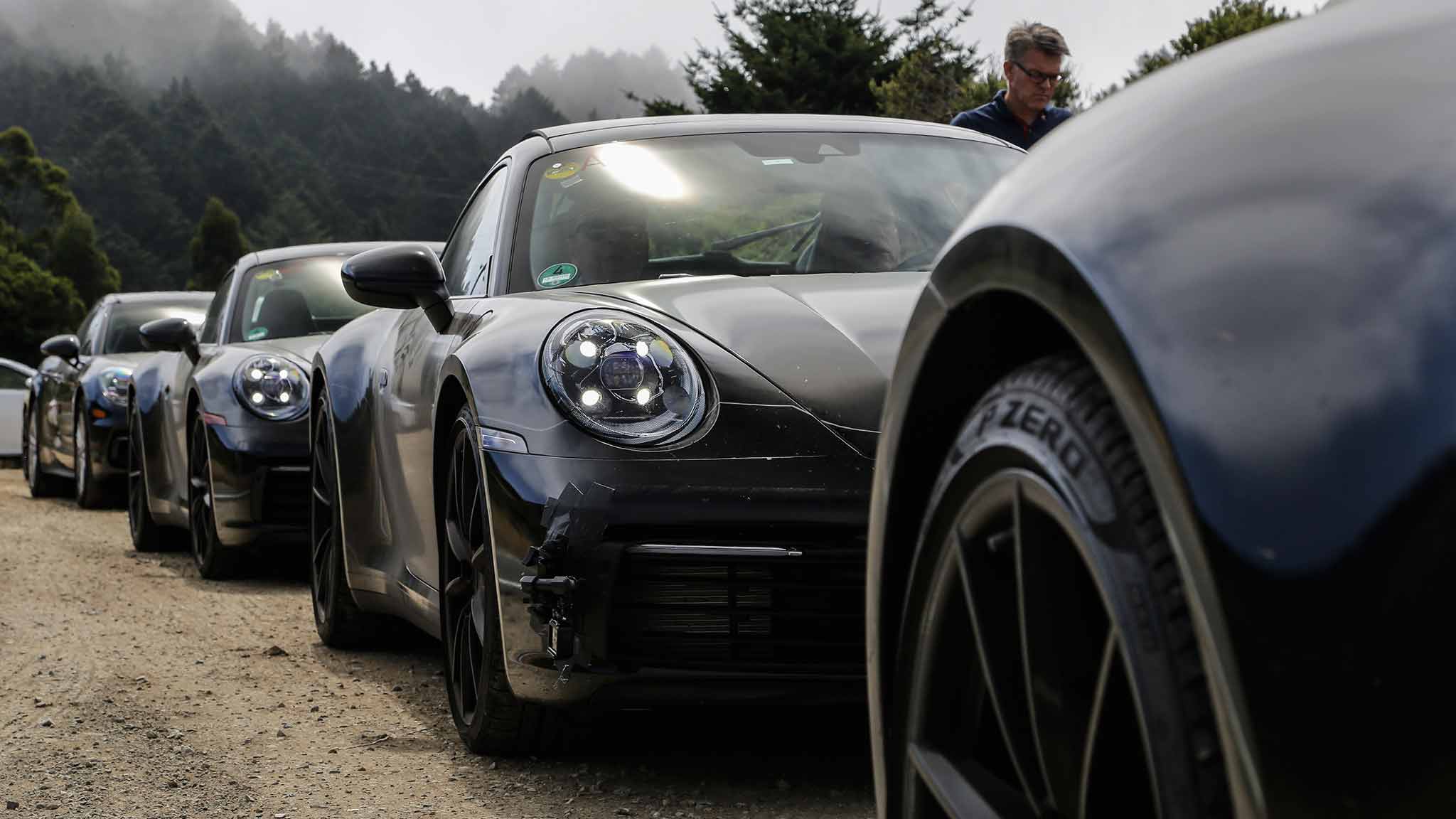 According to the Weissach grapevine, the first-ever all-electric 911 will debut in 2028 alongside the 992 replacement. Why wait so long? Because the plug-in hybrid is a convincing stopgap solution for many markets, because battery weight has to come down in sync with a more efficiency cell chemistry, and because even a planet-saving 911 must be an ultra-fast, hardcore piece of kit. Porsche is apparently convinced that it can deliver on all counts. After all, the latest master plan projects BEVs to exceed 85 percent of the sales total come 2028.

While the smart brand lives on borrowed time, a sub-A-class small-star Mercedes is taking shape

Smart is in the process of going 100 percent electric, but this doesn’t mean that the marque has a future. Quite the contrary: according to various sources, Renault is going to pull out once the ForFour/Twingo reaches the end of its cycle, Mercedes is not interested in keeping the Smart car brand going all by itself, and whether Geely may want to jump in and lift the business case to a more profitable new level remains to be seen. Right now, the internal plan is that smart will be wound up by 2026 at the earliest. The question remains whether Mercedes will pull out of the segment completely, or if the new CEO Ola Kallenius might be actively looking for options to keep the three-pointed star in the race against Mini and the Audi A1/Q1/City. The board needs to come to a conclusion by 2021 when it must sign off the next A-class generation due in 2025. If we read the smoke signals right, the current MFA2 architecture will be replaced by a fully scalable, all-new convergence layout which covers a much broader product spectrum that could also include a proper baby Benz.

At this point, strategists and product planners are evaluating at least four different options:

Cooperation remains indeed an option—even though the tie-ups with Mitsubishi and Renault delivered mixed results. Last year, Mercedes and BMW discussed the pros and cons of teaming up with regard to MX1 and the bigger MX2 version, but to no avail. BMW ended the talks, thereby relegating the team from Stuttgart back to square one. Although the baby Benz has since dropped a notch or two on the agenda, electrification is a more urgent topic than ever, and so are new vehicle types tailor-made for metro mobility, commuter services, and innovative user models. The reinvented Mercedes née Smart is far from an approved program, but what is tentatively known as U-class (the U stands for urban & universal) has undergone various feasibility studies in combination with different design proposals. Under discussion are the following fully electric variations:

In frivolous moments, product planning even considered off-beat stuff like an emotional metro cruiser, a U-class Open Air, and a back-to-basics two-seater positioned between the unloved two-door A-class and the short-lived Smart coupé. In terms of content, the emphasis is split between the standardized e-componentry and bespoke abilities like the interface with Big Data, personalized services, and safety & convenience features. If the business case still looks good in 2021, the U-class may turn out to be one of the smartest cars Mercedes ever conceived. 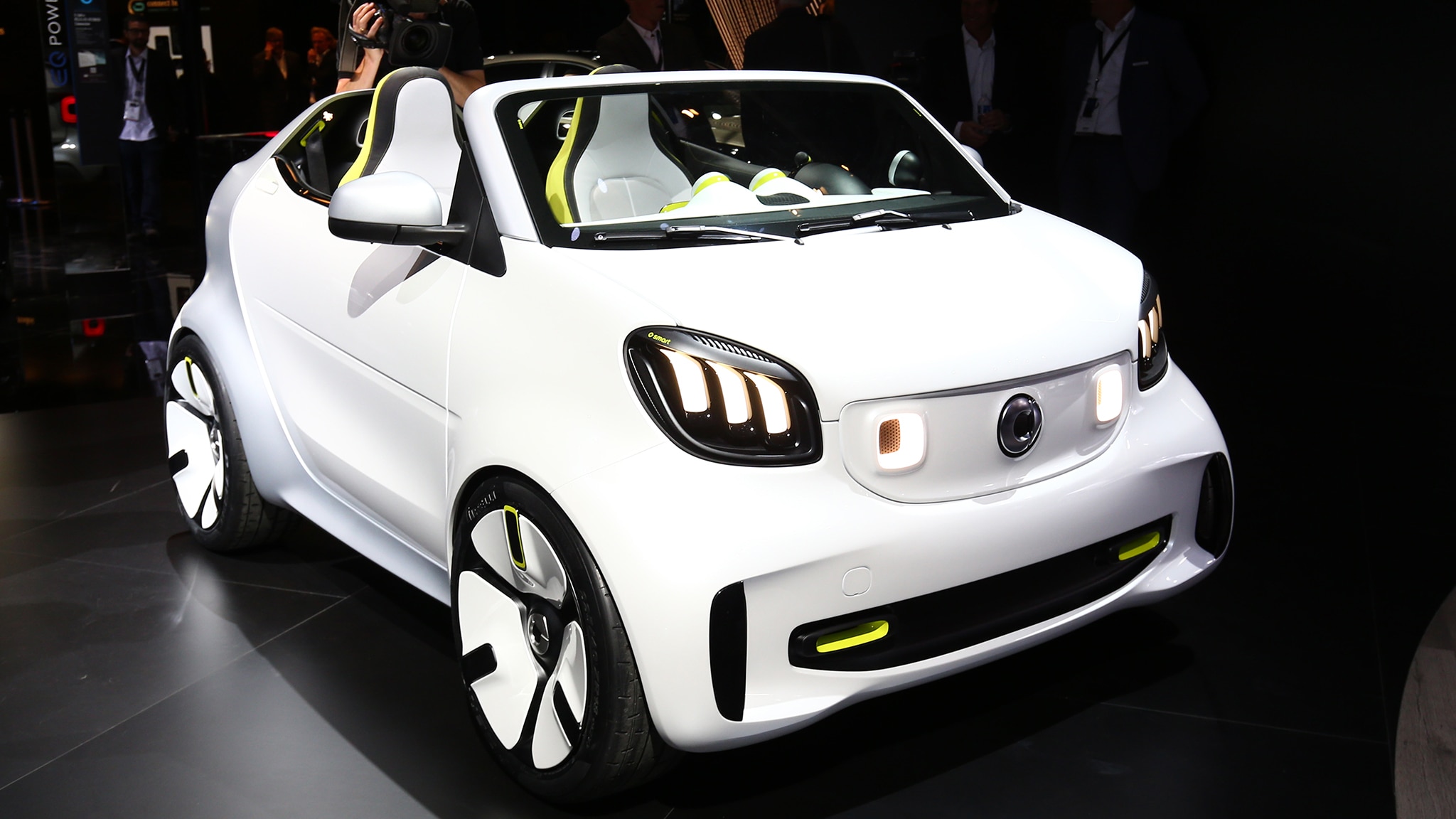