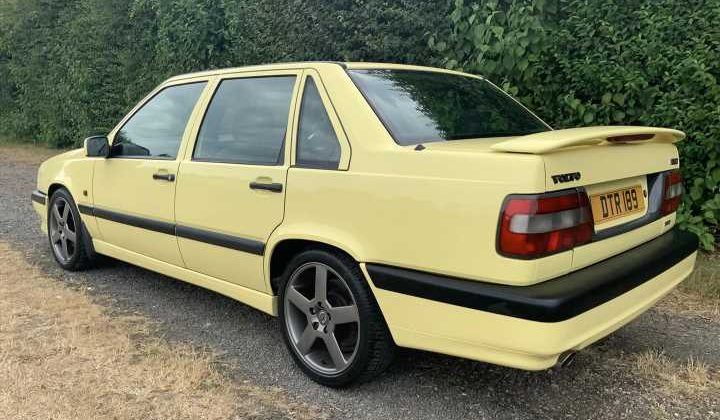 After all this time, it can feel like there’s not a lot left to say about the Volvo 850. But, hey, it’s a great story, and there’s no harm in hearing one of those again. Once upon a time, the most memorable thing about a Volvo estate – indeed about most estates – was their commodiousness. You could tell everyone about how much was squeezed into the back of a 940, but not much else. And an estate racing car? Forget about it.

But we all know what happened next. If Audi created the uber-estate with the RS2, Volvo democratised it with the various turbocharged 850s. Then made motorsport history with the BTCC car. What tends to get lost in that story, however, is that the 850 saloon that followed the wagon was actually the more successful racing car. Which is quite cool. Everyone tends to forget that the estate was a bit crap in the BTCC, even if it was a genius bit of PR; Rickard Rydell and Jan Lammers finished 14th and 15th in the 1994 season, with Volvo ranking eighth in a 10-horse manufacturers’ championship. The two-car 850 estate team was only ranked ahead of Old Spice Nissan Racing and Team Mazda’s pair of Xedos 6s.

That all changed for 1995, after the saloon switch. Rydell won as early as round two, mounting a proper championship charge after then and finishing third overall with four wins. The Volvo team also finished third overall. Both Rydell and the team would repeat those achievements in 1996 before the switch to the S40 in ’97. The 850 saloon may not be the one everyone remembers, but its almost-forgotten success might make it the cooler derivative – discuss…

What’s certainly not up for any debate is that a Volvo with an ‘850’ and a ‘T5’ badge on the back of it is hugely desirable to a certain kind of enthusiast now. When suitable right-hand drive cars are being imported from Japan to sate demand, it’s clear that this is rather more than a phase. All the 850s were hardy Volvos at heart, but they’re all nearing 30 years old now, and it means finding good ones is becoming more difficult almost by the month. The fact that many will have served as family workhorses, and suffered when values were at their lowest, hasn’t helped their cause as collectible classics. There just aren’t many around.

But there are some, and they can’t come any better than this Gul T5-R saloon. It’s the dream specification: a UK car, in yellow, with a manual gearbox. Many were specced with the auto when new, and nowadays the five-speed cars command a premium. This is no surprise, really, given old autos really feel their age now in anything vaguely sporting.

A Volvo like this is probably even rarer than you’d imagine now. The T5-R was only available for 1995, before being replaced by the 850R. The saloon was less popular than the estate and, although Cream Yellow is sought after now, it was the more sombre dark green and black that sold better. Bring all that together and the advert for this one reckons that just 28 T5-Rs ever came to the UK in this specification; it’s believed the number of survivors might now be in single figures. In yellow with so few around the 850 is basically Swedish exotica.

This will be worth remembering when confronted with the price – £26,950 is more than this Volvo will have cost since the 20th century. But as a genuine, one-owner T5-R, original down to its colour-coded floor mats, this may well be a unique specimen. And we all know what a powerful drug nostalgia can be, especially when it involves five-cylinder turbos. Finally, if this T5-R is too much, the selling dealer – quite miraculously – also has a Dark Olive Pearl wagon in stock for half as much. Buying either immediately qualifies you as PH royalty, of course; imagine if some legend went in for both…