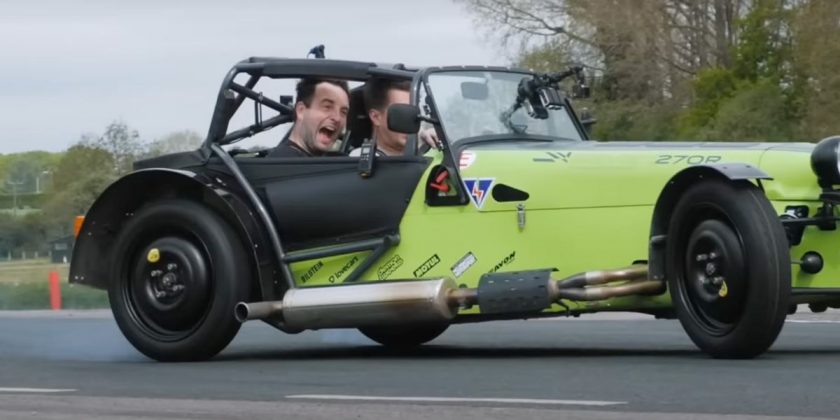 Ever wondered what it would be like to drive your car on four super-thin space-saver spare tyres? Of course you have! Driven Media decided to find out, and their latest video features a space-saver shod Caterham Seven and a test track to see if less grip equals more fun, and to find out what happens when the rubber is pushed well beyond its 50mph limit. We all know someone guilty of using their spare longer than they’re meant to, and it might be worth sending this link their way.

The spare tyres are a hard compound and hilariously narrow, so grip is obviously in short supply as a result. The Caterham is first pitted against a BMW M5 in a burnout competition, then tested on space savers to see how a lap time compares to its regular tyres. Of course, there’s also plenty of drifting to see how long the ‘get you home’ tyres can actually cling on to survival.

Spoiler alert: the lack of grip has a massive effect on the Caterham’s performance, but the fun factor is off the charts. Plus, the lightweight Caterham manages to do an impressive burnout against the BMW M5 on the weedy little tyres, despite having less than a quarter of its power. It’s just a shame it’s inadvisable – and likely illegal – to drive with more than one space-saver fitted, and for more than 50 miles of use on public roads.

Driven Media also tested the Caterham on F1 tyres in the pursuit of more grip in a separate video, with surprising results. Anyone who’s ever watched Formula 1 will have witnessed the amazing way the cars dart round the sharpest corners with unparalleled agility, so if their tyres offer so much grip on the track, it does make you wonder, how amazing would a sports car be if it was fitted with F1 tyres?

They decided to put that to the test, by sticking F1 tyres onto the Caterham Seven to answer the question. In terms of handling, a Caterham Seven with F1 tyres is a bit of a disappointment. It may seem counterintuitive, but F1 tyres are surprisingly slippery when they’re not up to temperature. As the guys drive around a test track, you can see the lack of traction the Caterham suffers from, with its tail constantly wagging round the corners.

There are a few reasons for this. The Caterham’s light weight and lack of high-downforce wings and splitters can’t push the car into the tarmac or get the tyres into their operating window. An F1 car’s tyres need to reach temperatures of approximately 100-degrees Celsius (around 212 degrees Fahrenheit) before they become fully effective.

It wasn’t a straight swap, either. Naturally, you can’t bolt an F1’s centre-locked wheels onto a road car without a bespoke solution, so the guys from Driven Media had to measure and machine four adapters to attach the wheels to the Caterham’s hubs – an admirable commitment to the cause.

They even took the Caterham out to a local supermarket car park with its new F1 shoes on, putting it through some rigorous scientific tests to see how easy they were to live with in the real world. Parking proves to be a struggle as turning the steering wheel to full lock is a challenge with such wide tyres, and fitting tyre warmers takes quite a lot of time when popping out for a few pints of milk.

One of the most surprising side-effects of sticking the specialised F1 tyres onto a Caterham turns out to be how many heads the car turns, with the YouTubers attracting the attention of an elderly lady who can’t keep her hands off it. We have to admit, in terms of aesthetics, the Caterham Seven looks well-suited to F1 tyres – it’s just a shame they don’t offer eye-popping levels of grip.