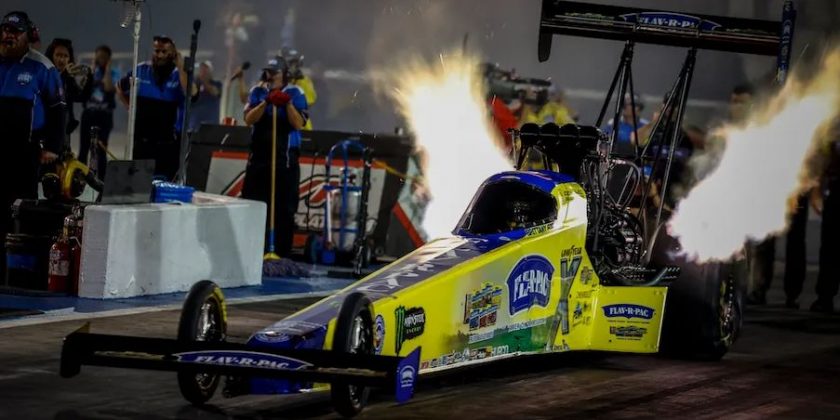 Pruett, an NHRA Top Fuel dragster pilot, said Saturday night that “race day is going to be astronomically fast. It’s actually going to be so tight and so fast in some of the most unique conditions we’ve seen all year.”

That was problematic for many, while some managed to set track records during the Sunday eliminations at the NHRA Caming World Drag Racing Series Thunder Valley Nationals at Bristol, Tennessee.

In the first round of Top Fuel eliminations, five racers had engine explosions. Spencer Massey, Josh Hart, Billy Torrence, and in the same pairing Brittany Force and Lex Joon scattered parts and pieces about the 1,000-foot course.

“Clearly, this is some of the best weather we’ve seen all year,” three-time defending NHRA Top Fuel champ Steve Torrence said. “This first round’s taking a long time, because a lot of guys are blowing up and just missing it a little bit. When the air’s this good, these things are wanting to make all the power. Sometimes they just can’t stay together.

“It’s cool, and it’s very, very tight. It’s something that we haven’t been on all year,” he said. “And it’s coupled with very good air. We’ve got some altitude, and it’s dry and it’s cool. These are conditions we don’t normally see. When you’ve got a greater load and the air quality that it is, it makes the fuel demand very critical. The window for air on the tune-up gets really small. As the track begins to heat up, it’s going to make it more like normal. So we’ll see the attrition rate get better as the day goes on.”

The track temperature started out at 81 degrees. By the time clean-up form the Top Fuel opening round was complete, the racing-surface temperature improved to near 90 degrees and by Round 2 was 100. And engines calmed down.

But the track itself continued to be tricky. Part of Bristol Dragway’s unique characteristics are bumps, blamed largely on the tunnels that connect the grandstands to the pits. Clearly, some racers didn’t care for the extra drama that brought.

Bob Tasca III said after advancing to the quarterfinals, “This is about as close to off-road racing as you’re ever going to get in a nitro Funny Car. Real challenging out there. You’ve got a couple of big bumps—I’m talking ski-ramp type of bumps. And the track is tight, the conditions are cool, and the crew chiefs have to make the right call. But this place has been good to me.” (He won here in 2019, when the tour made its previous stop.)

JR Todd considered the track a handful, as well. He said, “In the left lane, you’re steering it and nothing’s happening because it’s so bumpy. When it [the car] does come down, it shoots you all over the lane.” Despite his continued success, Todd said after his next round-win, “It’s gnarly out there. The front wheels are in the air. I got my hands full driving that DHL Toyota Camry.

“This track has a lot more than character. I hope we’re safe,” Pro Stock Motorcycle finalist Angelle Sampey said as she prepared for her showdown against Karen Stoffer.

After she earned her 45th trophy aboard the Mission Suzuki, Sampey said, “I asked (first-round opponent and Vance & Hines teammate) Andrew Hines if he wanted a solo pass. I wasn’t even sure I wanted to run down the track. I’m so glad it’s over. I’ve never been so excited to finish a race in my life. I prayed to God to get me down the track safely four rounds. Normally I feel like a big, fire-breathing dragon. This track made me feel small.”

Pruett said her first concern when Massey’s engine let go was his safety but said, “At one moment there was nothing, and the next moment I’m driving through a range of parts raining down from the atmosphere, dodging and weaving, trying to avoid driving over anything. Everyone is safe.”

And not everyone was bothered.

John Force said, “I leave that to the crew chiefs. That’s why they get paid the big bucks. I try to have fun on race day. I really love driving these race cars. That’s why I’m here.”

His Funny Car colleague Cruz Pedregon said lane choice at this facility is “not critical. It just gives everybody something to talk about and something to complain about.”

Mike Salinas said he hit a bump during his No. 2-qualifier run Saturday that “almost pulled that steering wheel out of my hands. Just had to really grip it from half-track on, that’s all. It’s a great facility. They’re doing everything they can. I’m glad they welcome us here.”

Sunday he had no problem with the lanes, reaching both the Pro Mod semifinals and the Top Fuel final and winning the latter. He set the Top Fuel track speed record at 334.32 mph in the opening round – before Justin Ashley came along three pairs later and rewrote it at 334.48 mph.