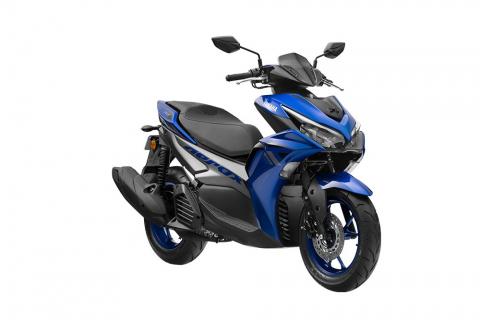 While the scooter doesn’t have any direct rivals, its closest competition is the Aprilia SXR 160.

Yamaha Aerox 155 scooter has been launched in the Indian market with a price tag of Rs. 1.29 lakh (ex-showroom, Delhi).

The new maxi-style performance scooter from the Japanese two-wheeler brand comes with an underbone design. The Aerox 155 comes with plenty of features and equipment, including LED lighting all around, a fully digital instrument cluster with Bluetooth and USB connectivity, start/stop tech and a large 25-litre under-seat storage capacity.

The scooter also comes with large 14-inch wheels with a 140-section tyre at the rear. Yamaha offers the Aerox 155 with telescopic forks upfront and twin shocks at the rear. Braking is via a disc at the front and a drum brake at the back, supported by single-channel ABS as standard.

The Yamaha Aerox 155 uses the same 155cc single-cylinder liquid-cooled engine which also powers the newly-launched R15 V4.0 motorcycle. However, the engine on the Aerox has been de-tuned to produce 15 BHP and 13.9 Nm; making it the most powerful scooter currently on sale in the Indian market.

While the scooter doesn’t have any direct rivals, its closest competition is the Aprilia SXR 160.