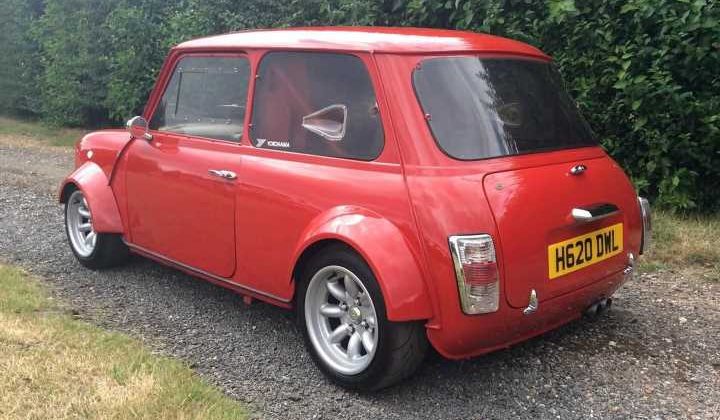 As cute as a kitten. As dangerous as a mountain lion

The ink was barely dry on Alec Issigonis’s sketch for the original Mini before people were thinking about modifying it. The great man had intended his creation to be a minimalist economy car to mobilise the masses – a British equivalent of the Fiat 500 or Citroen 2CV. But it didn’t take long for the performance potential of BMC’s front-driven baby to be realised, then acted upon.

Issigonis wasn’t too keen on this new direction. He even argued against the creation of the first Mini Cooper – which swapped the regular 850’s 34hp A-Series engine for the searing performance of a 55hp 1.0-litre twin-carb. Factory power outputs grew beyond that during the Mini’s lifetime, but not by very much, the giant-slaying Cooper S only made 76hp. Even when the Mini gained fuel injection close to the end of its long existence the 1275 engine was only making 63hp.

So it’s fair to assume that, if he was still with us, Sir Alec might not regard this week’s star as being a worthy continuation of his legacy. Which doesn’t stop it from being awesome: a rear-drive Mini that makes a claimed 340hp through the combined efforts of two Yamaha R1 motorbike engines.

We have previously featured Brave Pills that require courage for their rarity, those that qualify through mechanical complication and their hardness to fix and even some that have earned inclusion solely on their general scariness and potential to make fresh widows. But this Mini is a full house, with a tick against every box. It definitely won’t be for everybody, or even most, but aren’t you vicariously happy to live in the world where something this mad exists?

The Mini has been subjected to many unlikely engine swaps over the years, from VTECs to V8s, but this is undoubtedly one of the maddest. Yet also, in its own insane way, surprisingly rational. Even the punchiest motorbike engines tend to struggle to move the mass of cars, but the classic Mini’s diminutive size and lightweight means it is barely heavier than one of the skeletal sports cars that normally get such transplants.

Not that there is much of the original 1990 Mini Mayfair’s core structure left. The conversion was carried out by well-known specialist Z Cars back in 2000-2001, with the donor having been given a rear bulkhead behind the two remaining seats and a heavyweight integral roll-cage. The original hydrolastic suspension has been binned, with the Mini now treated to coilovers with adjustable travel and rebound and fully rose-jointed suspension mounted to new subframes at each end.

The double engine installation is where things get more mind-bending. Two ex-Yamaha R1 four-cylinder engines are mounted, offset, in the rear of the car, their six-speed bike gearboxes plugged into a common drive – which then turns the rear wheels via a limited slip differential.

Although it has eight cylinders and two litres of displacement – the capacity accurately reflected on the DVLA database – the two engines are still entirely separate, although with common throttle and clutch cables. That means the car can be driven using one or both, with the seller even saying it is possible to have each working in a different gear. Ratios are selected by the metal selector sprouting from the dashboard with separate levers for each transmission. Oh, and there’s no reverse gear, backing up done either under the power of an electric motor or – more easily – by manual heaving.

Given the claimed 340hp total output, each engine is presumably making 170hp – suggesting either a modest retune over the standard early R1 engines or an upgrade to the later 2004-on R1 motor. Those power peaks arrive at around 11,000rpm, with the motors revving to nearly 14,000rpm. Torque will be considerably less – 72 lb ft from each engine, with that coming at a Himalayan 8,000rpm. Something that might become an issue for anyone contemplating exposing the FrankenMini to stop-start traffic – although it will sound amazing when fully unleashed.

Weighing less than 700kg this Mini has the power-to-weight ratio of a sharp-end supercar, but will be considerably more exciting to drive hard. Pants-fillingly exciting. As the commendably forthright advert text puts it, this is a car that has “potential to thrill you and kill you in equal measure – please only enquire if you understand the above.”

Other people have had similar ideas over the years, most famously John Cooper himself who built an all-wheel drive ‘Twini’ with a 1,088cc engine in the front and a 1,212cc engine in the rear, these producing a combined total of 178hp. He also ably demonstrated the risks of combining so much urge with so little car, narrowly surviving a nasty crash in the prototype on the Kingston Bypass in 1964, one that ended the idea of a production version. Our Pill is a car with nearly twice the power, and half the driven wheels.

The question of money always gets the virtual bread rolls flying when it comes to cars like this. The dealer selling it is advertising it for £21,500. A figure which, as they point out, represents an almost certainly unbeatable level of bang-per-buck for anyone possessing the cast-iron trouser furniture necessary to contemplate driving a car like this either hard or often.

We’re told the original conversion cost around £38,000 twenty years ago, and doing something similar would undoubtedly now cost considerably more; even low-grade base Minis are now going for five grand. For anybody who has been contemplating creating their own mad Mini special, this is one that can seemingly short-cut most of the time and expense of doing it all from scratch. But that obviously means it is fishing in a bijou pond in terms of potential owners.

Our Pill’s MOT history, although whistle clean, gives an interesting idea of the way cars like this tend to live. The last six tests were all passed without a single advisory, although with no mileage recorded due to the lack of an odometer. But these took place in 2006, 2009, 2010, 2013, 2016 and then August this year. The Mini may well have been loved and enjoyed during those long gaps – and possibly transported on a trailer. But they suggest that its previous owners have had limited enthusiasm for making even modest use of the car’s putative road legality.

Anyway, that’s it for this year – next week will be the traditional greatest hits compilation. Meaning that the last Pill of the year is almost certainly the bravest; here’s hoping 2021 offers even more compelling madness.