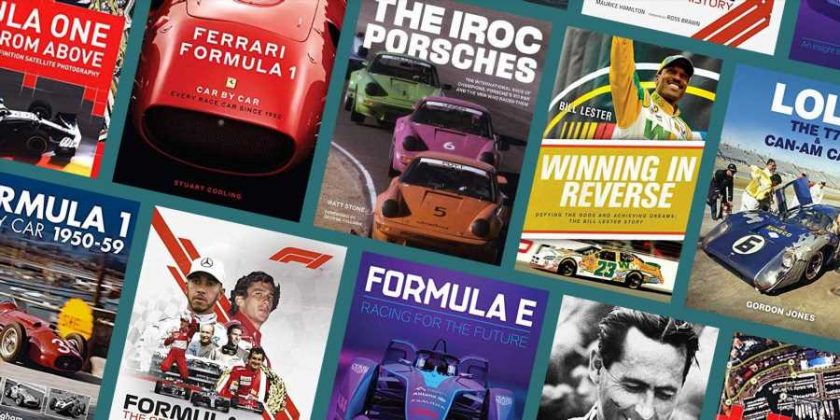 So, the motorsports section of your personal library is due for a makeover. Or, maybe the holiday gift-givers in our life missed your racing wish list.

From Formula 1 to NASCAR, here’s 10 books that either came out in 2020 or on deck for 2021 that are worth checking out or adding to your personal collection:

The IROC Porsches chronicles the original International Race of Champions 1973–74 season, in which the world’s top drivers battled in identical Porsche RSRs to claim the title of world’s greatest racing driver.

The IROC series was founded around purpose-built, virtually identical 1974 3.0-liter Porsche 911 RSR racing cars to be driven by racing greats from IndyCar, Formula 1, NASCAR, and other international racing series. The premise was simple and brilliant.

Ferrari Formula 1 Car by Car presents all of Ferrari’s F1 cars in chronological order with each car’s significant features, technical specifications, and its on-track record. This is one of the those book that has to be “red” cover to cover.

The story of racing pioneer Bill Lester, whose determination and spirit helped paved the way for a new generation of racers, is not your run-of-the-mill biography.

Lester made history when he became the first African-American racer to race in NASCAR’s Busch Series, the first to race in the Cup Series and the first to win a pole in the NASCAR Truck Series. And it wasn’t easy.

Another must-have for Ferrari faithful, this two-volume works, Ferrari 1000 GP: The Official Book, is a limited edition tribute to Scuderia Ferrari and the remarkable objective of 1,000 Grands Prix achieved by the team from Maranello in 2020.

Consisting of more than 700 pages and including more than 1,000 illustrations, many of which are previously unpublished, the work traces the incredible story of Ferrari’s participation in Formula 1 that began in 1950 with the Monaco Grand Prix.

The coolest sports car of the late 1960s and early 1970s might just have been the Lola T70. In this new book, which has taken Lola enthusiast Gordon Jones three decades to complete, traces the racing history of the T70 and the Can-Am models that followed. It boasts more than 600 photographs.

This is the fourth in the series of decade books in this Formula 1 Car by Car series.

If you or the motorsports fan in your life is looking for the ultimate encyclopedia of F1 cars, this series fit the bill. And after you pick up Formula 1 Car By Car 1950-50, go back and check out previous editions in the series already on the shelves, including the sixties, seventies and eighties.

If you’ve never played around with Google Earth, you’re missing a great way to tour the world from your couch. The book Formula One Circuits From Above gives fans a unique look and a different way to appreciate some of the greatest circuits in racing.

The book is a great reference book ahead of the next big race.

Formula 1: The Official History is a illustrated history of Formula 1 that traces the Drivers’ World Championship, decade by decade, from its first race on May 13, 1950 through all 70 seasons.

This book charts the championship, highlighting the racing heroes, growth and diversity of each season, title races, arrival and departure of manufacturers, key moments and the major improvements in all aspects of safety

Formula E, the world’s leading electric-racing series, is leading the way for the future of motorsport, promoting electric power for a sustainable future. And, as those who have attended the races will attest, it’s quite a show.

This officially licensed book, produced with cooperation of Formula E and the teams, provides insight into the series, featuring input from the teams and drivers to take the reader behind the scenes dating back to the beginning of the series in 2014.

Sir Jack Brabham was unique in the world of motor racing. He was the boy from Sydney who took on the elite of motor racing and won three F1 world championships, the last one in a car not only built by his own Brabham company, but with an Australian engine he’d helped develop.

To those who saw him on the podium, Jack Brabham might have seemed glorious and triumphant. But he was also a man of secrets. This book pulls back the curtain on some of those secrets.