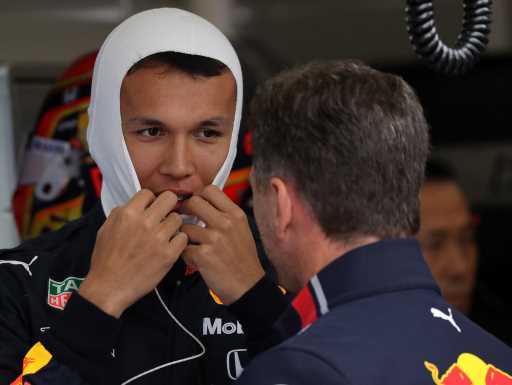 Jenson Button said he learnt a harsh lesson early in his career due to having zero technical knowledge, comparing himself to Alex Albon.

Albon’s Formula 1 career started with some impressive performances for Toro Rosso, but just like Pierre Gasly before, he hasn’t delivered since receiving the call-up to Red Bull and how his Formula 1 career is in jeopardy.

But Button’s early days in Formula 1 were far from smooth, in fact, his lack of technical knowledge and ability to give feedback almost cost him his career before it really got going.

“I was having so much fun and my first year of F1 was so straightforward,” he said as part of the Collecting Cars Podcast.

“The [Williams] car felt great, Sir Frank [Williams] and Patrick [Head] were so forgiving, I don’t think I ever crashed in a race to be fair.

“I remember one time in Hockenheim Frank said ‘you’re a second slower than Ralf [Schumacher] your team-mate on the pit entry so I want you to push harder next time’.

“So I came in, lost it, put it in the wall of the pit lane, and I trundled back to the pits.

“And Patrick came and said ‘Jenson, what the f*****g hell were you doing there?’

“And Frank shouted over and said ‘Patrick, be quiet. Jenson I’m proud of you, thank you so much for pushing, just next time take it a little easier’.

“Then the second year I got signed up with Benetton, really excited, and yeah my talent was not enough.

“I was terrible at engineering a car, I had no idea what to do, and no understanding of a racing car at all.

“I remember when I got my drive with Williams, I drove the car and I was two-and-a-half tenths quicker than their test driver, and then they made me do an exam.

“They said ‘right, here are the questions, fill out the answers’. I had no idea, I got probably three right in 20 questions.

“The Williams just worked, and I got in the Benetton and it was upside down, nothing worked.

“My team-mate was Giancarlo Fisichella who is notoriously good at driving really bad cars, so he blew me away a lot of the time, and mentally that really hurt, I didn’t get it.”

Understandably then Button’s confidence was crushed somewhat by this experience.

“I really struggled because I just didn’t think I was good enough, ‘I’m not driving quick enough, I just don’t have any skill’,” he explained.

“And to be fair Flavio [Briatore, Benetton managing director] was very tough on me, I remember I finished 7th in Monaco which these days wouldn’t be too bad, I was just off the points for top six.

“And he said ‘what were you doing, were you driving around looking for an apartment or a boat to buy?’

“And so it was really tough, but I needed that otherwise I wouldn’t be racing in F1 past 2002, they really pushed me hard and he said ‘you need to knuckle down, you need to do the engineering work’.

“My engineers were softies, I’d get away with murder with them. I’d turn up late, wouldn’t really understand what was going on.”

So, does Button see the same struggles he had in any current Formula 1 driver?

“I think that they [Red Bull] have actually turned a corner with how they’re treating their young drivers.

“I think over the years they’ve been tough, especially with Gasly, I think with Albon they’ve realised they need to take it a bit easier, and maybe work with him with engineering and try to get him up to speed.

“The biggest issue is he’s got the quickest driver in the world for outright speed as a team-mate, who has also set the car up like he wants it which is on the nose, very oversteery, and no-one else can drive it.”

Albon’s team-mate of course being Max Verstappen who has come through the Red Bull driver programme to become a multiple time race winner in Formula 1.

But, still without a World Championship, is he really the fastest driver in Formula 1?

“Over one lap I think he is, in the race I think him and Lewis are up there, I also think Charles [Leclerc] is with them, at the moment Daniel [Ricciardo] is with them. I think those four stand alone.”

Hopefully Albon can take inspiration from the fact that Button went on from his early struggles to become World Champion in 2009 and claim 15 race wins in his career.