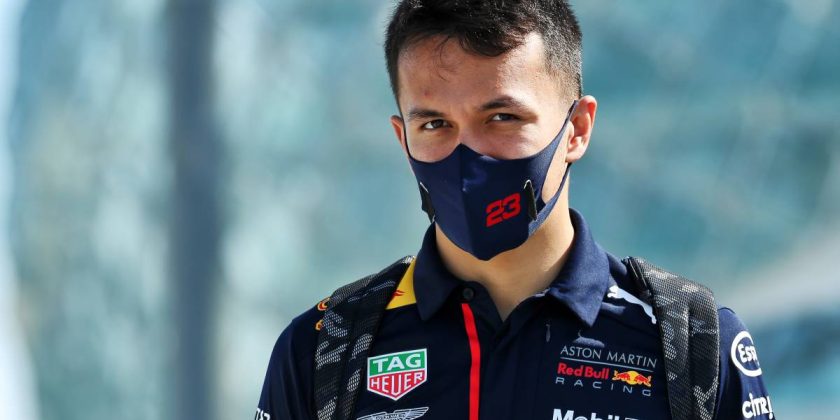 Even though he may not get to race it, Alex Albon has described the new Red Bull RB16B as “my winter project”.

Until mid-December, Albon would have been hoping to race Red Bull’s challenger for the 2021 season instead of merely testing it.

But that prospect faded when his disappointing 2020 campaign as Max Verstappen’s team-mate ended with being dropped as a race driver and Sergio Perez brought in instead.

Therefore, Albon has found himself having to try out a car on the simulator for which his input will only go towards helping other drivers – unless, as Red Bull’s reserve, he is called upon to step in at any point during the forthcoming campaign.

The RB16B was given its shakedown test at Silverstone in the past week with Verstappen and Perez at the wheel for the maximum permitted 100km run.

Albon, meanwhile, had to settle for a spin in the RB15 which he drove in the second half of 2019 after being promoted to replace the struggling Pierre Gasly.

Sticking on the softs for a blast around Silverstone 🇬🇧 #ChargeOn 🤘 pic.twitter.com/YzFm9RzwGW

“[RB16B] has kind of been my winter project a little bit, doing a lot of stuff with the sim,” said Albon, quoted by the Formula 1 website.

“Of course last year’s car had its difficulties and [my job has been] just kind of ironing them out, making sure we can hit the ground running this year.

“It’s been nice to see it translate and I know a lot of the stuff we’ve done has already made it onto the car before it’s even been driven, so it’s just showing all the hard work is paying off.”

One of the contributory factors to Albon’s troubled 2020 campaign was his difficulty in mastering the nuances of the RB16, and his successor Perez has already admitted he can see why the Red Bull has proved a difficult car to drive in recent times.

Albon added: “When you’re driving the new car, a lot of it is going back in time a little bit and trying to find the key areas we needed to improve on last year’s car. That’s something we did with this year’s car and it all seems to be going to plan.

“[The shakedown was about] understanding, let’s say, the personality of the RB16B. On my side, [it was also about] listening to the engineers, the drivers, on their feedback so I can take it back to Milton Keynes and work on it on that side of the car.”

In terms of racing in 2021, unless an F1 opportunity is presented Albon will have to content himself with a part-time DTM programme endorsed by Red Bull.