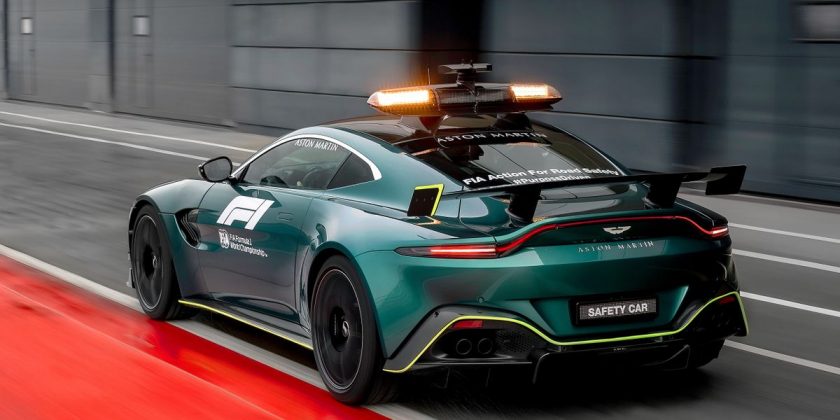 It’s normally around this time of year that we’ll be reporting on the latest F1 safety car. The vehicle in question is rarely surprise – it usually involves the latest and greatest Mercedes-AMG road car with a louder exhaust, some light bars and expensive communication equipment. Not so in 2021, with Aston Martin keen to capitalise on its re-entry to the sport via the rebrand of Racing Point.

The British company has taken over the job of supplying F1’s safety and medical cars, with a Vantage used for the former role and a DBX for the latter.

Aston Martin CEO Tobias Moers, former boss of Mercedes-AMG, as it happens, tasked a special team with making sure the cars were up to the job. For the Vantage, that meant a 25bhp bump in power for the AMG-sourced twin-turbo V8 to give a new total 528bhp, while increasing the downforce by 60kg via the addition of a new front splitter and rear spoiler. And yes, there’s a giant light bar.

There are unspecified steering and suspension modifications, and additional underbody bracing for better front-end rigidity. Inside, Aston has added FIA-approved bucket seats with six-point harnesses, and a whole host of technology to help long-time F1 car safety driver Bernd Mayländer and co-driver Richard Darker do their jobs.

The dash features a pair of screens giving a live TV feed of the on-track action and live track positioning for the cars on circuit. The Merc-borrowed rotary infotainment control has been shifted back, making room for a bank of switches to control things like the light bar, siren and communication system. Finally, there’s a ‘Marshalling System’ in the infotainment cluster that displays the flag colour being used on track at any given time.

Unlike the Vantage, the DBX doesn’t have any chassis modifications, but there are plenty of changes going on inside. It’s now a strict four-seater, with the standard front chairs and rear bench replaced with four bucket seats each featuring a six-point harness.

Occupying three of these will be driver Alan van der Merwe, FIA Medical Response Coordinator Dr Ian Roberts and a local doctor. The fourth seat is left free in case a driver needs to be rushed back to the pit lane. The DBX gets a similar twin-screen arrangement to the Vantage, with an extra display showing live biometric data fed by sensors buried in the drivers’ gloves.

The two cars will be used first for F1’s pre-season test at Bahrain’s Sakhir Circuit from 12-14, before being deployed for the season-opener at the same venue at the end of the month.