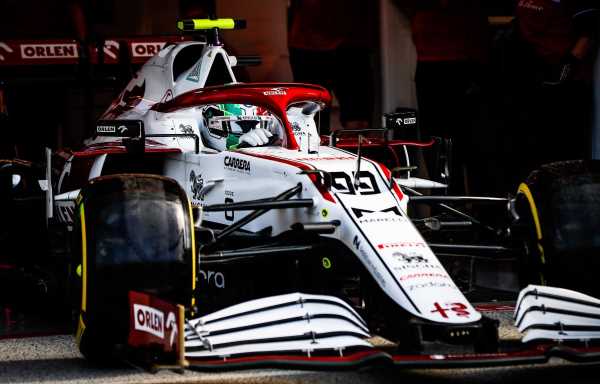 Antonio Giovinazzi enjoyed an excellent Saturday at Zandvoort, securing P7, but an issue very nearly prevented him from competing in Q3.

Before the Dutch Grand Prix, getting out of Q1 and into Q2 was considered a successful qualifying effort by Giovinazzi and Alfa Romeo, and that was expected to be the same again at Zandvoort.

However, the Italian vastly exceeded such expectations, ultimately having enough pace to take P7 ahead of many drivers in what are usually faster cars.

Things were nearly very different though as the team had trouble removing his right front wheel when he returned to the pits in Q2.

Thankfully, the red flag caused by Nicholas Latifi’s crash ensured Giovinazzi made it to the top-10 shootout without having to do another lap, and his crew managed to remove the wheel before Q3 started.

“I’m satisfied,” he told Sky Italia after the session.

“I think already from yesterday we proved our potential. A bit like at Monaco, already from Friday we were always there in the top 10.

“But today the most special thank you goes to the team because we had a problem in Q2, a wheel did not come off, the right front wheel. And there we were a bit unlucky, but then lucky because there was a red flag.

“But the guys didn’t give up. We managed to go in Q3 and the Q3 lap was awesome, the best result to thank the team for the work they did.”

Valtteri Bottas had a similar problem earlier this year in Monaco, forcing him to retire from the race, and it took his team a matter of days to finally remove the wheel.

Giovinazzi tried not to worry about the same thing happening to him though, instead visualising a lap of the circuit.

“I just saw a lot of sweat from the guys who wanted to solve the problem,” he added.

“My personal trainer told me to relax, to stay focused. And that’s what I did, then I imagined the lap to stay focused and then a great lap came out.”

Get comfy in there… quickly! 😉 #DutchGP pic.twitter.com/Sdy7lD9Mpw

Giovinazzi has a different team-mate this weekend with Robert Kubica standing in for Kimi Raikkonen, who tested positive for COVID-19.

Despite having very little practice in the car or on the track, he managed to qualify in P18, ahead of both Haas drivers, and feels he could have done even better without traffic.

“For sure the track is not easy, but you can’t choose these things,” he said.

“Clearly there are two factors that make it difficult – the lack of confidence, of understanding the car, and then lack of laps yesterday.

“Today it was not easy, it was important not to make mistakes. And for sure I could do better, but also the last run in qualifying I was not very lucky, I had much traffic on the out-lap, and on the launch lap I couldn’t warm up the tyres.”