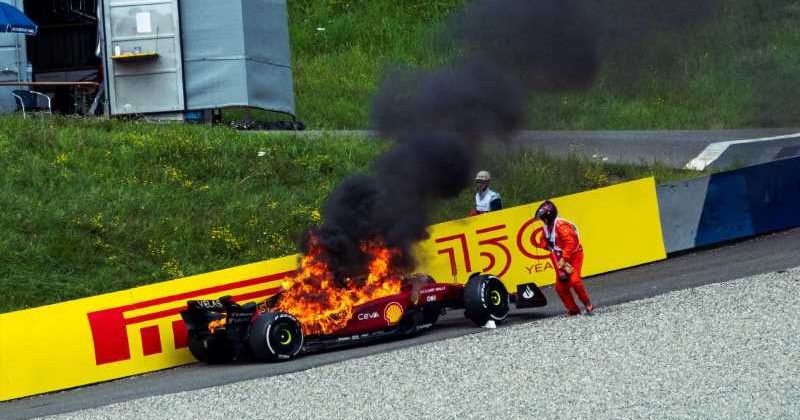 Austrian Grand Prix marshals have defended how long it took to extinguish the fire in the Ferrari of Carlos Sainz during the race won by his team-mate Charles Leclerc.

Sainz was looking all set to make it a Ferrari one-two at the Red Bull Ring ahead of Max Verstappen when his car suffered an engine failure as he was about to overtake the Dutchman on lap 58 of 71.

The F1-75 burst into flames as the Spaniard was pulling over at the side of the track and started rolling backwards downhill before the driver had managed to climb out, eventually doing so without coming to harm.

But the response from the marshals in putting out the fire appeared more sluggish than ideal, with Sainz saying afterwards: “I think the whole process was a bit slow. There was so much fire I had to really get a move on and jump out independently.

“I think it was just at that time the first marshal arrived and stopped the car.”

However, the marshals’ group at the Red Bull Ring, titled the Osterreichring Sicherheitsstaffel, have explained the situation from their perspective in a social media post.

Their statement read: “After the terrible accident of Jules Bianchi in 2014, the FIA’s rules regarding recoveries and interventions on the racetrack were drastically tightened.

“Intervention is only allowed after instructions from Race Control. On the one hand, this obviously increases the safety of the drivers and marshals, but on the other hand it has the disadvantage that interventions take a little longer.

“In the incident with Carlos Sainz in Turn 4, several unfortunate circumstances came together. The spot where Sainz parked the Ferrari was not visible from where the marshals were standing. They received instructions over the radio to go to the car with fire extinguishers.

“When they saw the situation, they made the decision to catch up with the fire engine. That decision had to be made within seconds and in hindsight, was absolutely correct.

“If you remember the [Romain] Grosjean accident (in Bahrain 2020), in a situation like that, hand-held fire extinguishers are absolutely not enough. Therefore, the fire extinguisher was put down and the vehicle was made up, which led to that unfortunate image on TV of the marshal ‘running away’.

“Other problems were that Sainz understandably got nervous in the vehicle and got off the brake too early. The wedge had to be pushed under the rolling vehicle, which of course made it extremely difficult. However, the resistance of the wedge caused the vehicle to steer into and stop at the guardrail. Subsequently, the fire could be extinguished with a few pushes of the extinguisher.

“Of course, in hindsight, when you look at the TV images and recordings from the track cameras, you find things that need to be improved. We will also discuss these internally and discuss them together with our people.

“But in this exceptional situation – because a fire is not an everyday thing for us either – the marshals by and large responded well. We had a fire truck on the scene in less than 30 seconds, which would have brought a rapidly spreading fire under control.

“Since Grosjean’s accident, it has been very important for us to have a lot of extinguishing power on site immediately to give the driver the best possible protection. Another emergency vehicle is already on standby and a third was on its way. Even in the event that Sainz had not come out of the vehicle on his own, we would have been able to protect him in the best possible way.”