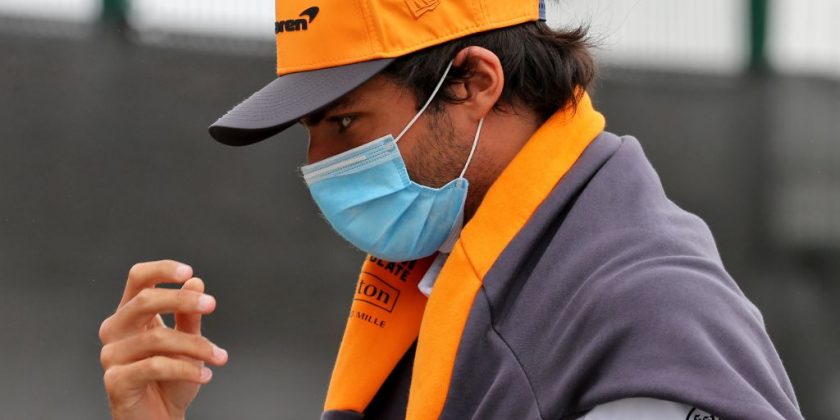 Carlos Sainz was shaking during post-qualifying interviews after having a “big moment” on his final lap in Q3 at Monza.

The McLaren driver was one of the stand-out performers of qualifying, doing enough to take P3 and ensure he’ll start at the front of the second row for the Italian Grand Prix.

However, according to the man himself, it wasn’t plain-sailing.

“On the last lap, I nearly messed up. I had a big moment in Lesmo 1, and I nearly lost it,” he said after the session.

“After that, I had to drive like this [on the edge] and I’m actually shaking a bit because in Parabolica and Ascari I had to really concentrate.

“I felt like I had nailed Q1, Q2 and Q3 run one. So I was waiting for Q3 run two, and the lap didn’t start very well. I was already needing some very strong final few corners and I really went for it. I risked a lot and, after the dive I did into Ascari, I was a bit like ‘woah, that was way too late!’”

Heading to Monza, Renault was the midfield team expected to be strongest thanks to their straight-line speed.

However, with both Sainz and Lando Norris qualifying ahead of Daniel Ricciardo, McLaren looks to be quicker than their engine suppliers. Sainz believes that the key is their improved running on with low-downforce setups.

“Honestly, I felt since Q1 we had the upper hand on the rest of the midfield and I just needed to put some clean laps together. But yeah, we’re running very low downforce which on our car last year didn’t work. Our downforce was just falling off whenever we ran very little rear wing.

“This year somehow our car is a bit more robust at running lower downforce levels and in Spa, it started to pay off. Here in Monza, we have a strong car under braking, which means we can brake late, and we have a strong car for Parabolica and Ascari, which obviously helps.”

McLaren is currently P3 in the Constructors’ Championships, with Racing Point, Ferrari and Renault close behind. With Ferrari struggling so much, a podium for the British team in Monza would go a long way to securing the sport going forward.