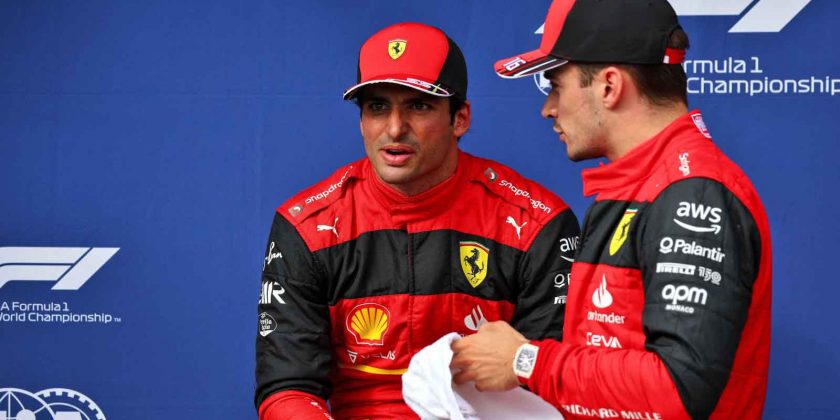 Charles Leclerc played down the need for team orders to come into play at Ferrari on Sunday, with he and Carlos Sainz starting second and third in the Hungarian Grand Prix.

Sainz took a place on the front row alongside George Russell on Saturday, with Leclerc coming in a place behind as the Mercedes driver pulled off a surprise pole position.

But with the troubles of Red Bull drivers Max Verstappen and Sergio Perez, who will start P10 and P11 after an engine issue and a Q2 elimination respectively, it presents a chance for Ferrari to close the gap in both championships on Sunday.

With that, the thought of Ferrari getting the pair to hold position if they are running close together will likely be crossing the team’s mind – limiting the risk of an accident or losing time while racing each other to try and maximise their possible gains compared to Red Bull.

Ferrari have rarely interfered in previous duels between Leclerc and Sainz this season, and the Monégasque driver sees no need for that to change.

Addressing the possibility of team orders in the post-qualifying press conference, Leclerc said: “Honestly, I mean, at the end, we need just to do the best job possible. So, focus on ourselves.

“I don’t think there’s anything needed there, or just obviously not taking any risk in between cars. But that’s normal. So, I don’t think anything special for tomorrow, no.”

With World Championship leader Verstappen left out of position on a circuit where overtaking can be difficult, Ferrari have a leg up in the race that has rarely been seen for them this year.

Both drivers were asked if they were ‘safe’ from the threat of the Red Bull driver on Sunday, but neither would be drawn on how much of a factor he could be in the fight for race victory.

“I don’t know if it’s safe, I don’t know what do you mean by safe, but I think tomorrow our target is to win the race [and] not focus too much where Max is,” Sainz said.

“Because we know that if we want to get points in the championship, the easiest way to do that is by winning, so independent of where Max is we want to go for that win.”

“Yeah, nothing to add,” Leclerc continued. “I think we’ll try and go for the win.

“Max is starting tenth so it might take him a bit more laps to come back to the front, but we’ll just focus on ourselves and try to win the race.”