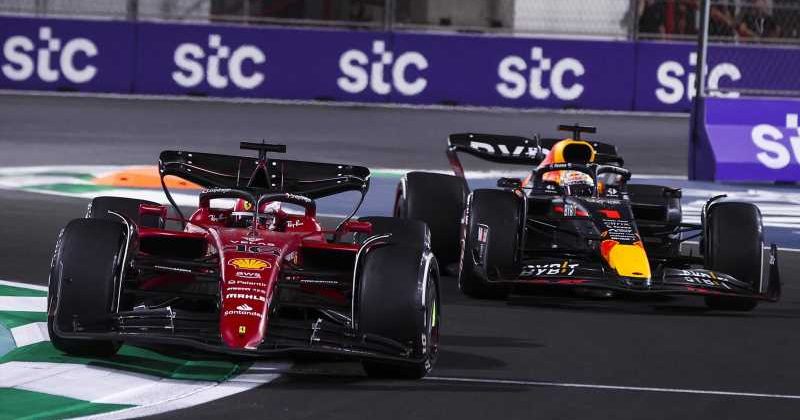 Charles Leclerc is ready to “play smart” against Red Bull at the Australian Grand Prix in respect of gaining a DRS advantage.

The Ferrari driver and Max Verstappen have been playing a “cat and mouse game”, in the words of Red Bull boss Christian Horner, when battling for the lead during the opening two races of the season.

It was Leclerc who got the better of that tussle in Bahrain, holding the lead when Verstappen had to retire and going on to win, but the tables were turned in Saudi Arabia where the World Champion got his title defence up and running with a narrow victory.

On both occasions, the duo were trying to maximise their chances against the other by hitting the brakes just before a DRS detection point to stay behind their rival and thus ensure it was they who got the drag reduction boost in the next activation zone.

After his Jeddah triumph, Verstappen referred to it as “smart tricks” – and with four DRS zones for round three of the championship in Melbourne, Leclerc expects those tactics to be in play again.

“We’ve seen in the past two races the strategy with the DRS and I’m pretty sure we will see it even more here,” said the Monegasque driver during an interview with F1 TV.

“Basically, all the straights have a DRS zone, so overtaking will be a thing and clever racing can make a big difference here.

“It’s always quite tricky but I will always try to do the best job possible and obviously with the weakness we have at the moment with straight-line speed against Red Bull, we need to try and play smart.”

Although Ferrari and Red Bull have been closely matched at the front so far this year, Leclerc believes track characteristics play to their respective strengths – and that the Scuderia will find themselves more suited by the Emilia Romagna Grand Prix at Imola on April 24 than the revamped Albert Park.

Asked what he makes of the redesigned Melbourne layout, the 24-year-old said: “[It looks] much, much quicker, to be honest.

“I think the old one would have suited us better, but it’s the way it is now and we will try to maximise everything this weekend, as always, and hopefully Imola will be a track that suits us a bit better.

“Overall, I think the track characteristics here are not fitting very well with our [car], but everything is to play for and I still think we will be in the mix.

“It will still be very close, it’s not like there will be a big gap, so if we do the perfect weekend anything is possible.”