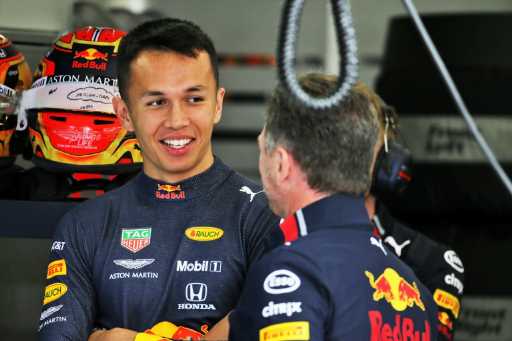 Albon, like his team-mate Max Verstappen, struggled during practice and qualifying with a car that was handling unpredictably and aired his frustration over the team radio on multiple occasions.

The London-born Thai driver also provoked a verbal tit-for-tat between Verstappen and Williams rival George Russell, a friend of Albon. Russell claimed Red Bull were making Albon “look like an idiot” – Verstappen retorted by telling him to mind his own business.

But in the race at the Hungaroring, having started 13th on the grid, Albon worked his way up to finish P5 – a distinct improvement compared to the Styrian Grand Prix a week earlier when he was a distant, never-dangerous fourth.

Asked to assess Albon’s performance in Budapest, Horner, as reported by Autosport, said: “I’m very pleased. It was a difficult weekend for Alex, the car spec changed a lot from session to session and when you haven’t got the experience, as he doesn’t, that’s harder to deal with.

“So I think actually in the race, when he managed to find his rhythm, his pace was very good and comparable with Max.

“His overtaking was strong and against Ferraris and whoever else he was passing out there, I thought he did a super job.

“If you look at his pace in clear air, it was pretty decent. I think we are very, very satisfied with Alex’s performance.”

Introducing the new relationship between @alex_albon and turn one at the Hungaroring ❤️ A perfect match 🥰 #SendIt #AA23 pic.twitter.com/aSO2jnYrbJ

Horner admitted the team have not made Albon’s life easy with an occasionally temperamental RB16 chassis.

The team boss added: “He’s had a tough start to the year in that we haven’t given him a car that suited him, and Max’s ability to drive around problems sometimes masks them.

“I actually think Alex has driven very well in the races this year and hopefully as we improve the car, the Saturdays will improve.

“But his race craft, his race pace in Austria last week, if you look when he was in clear air in the second half of the race, and his performance in Hungary, I think he’s done a great job and I struggle to understand any criticism of him that you guys (the media) may have.”