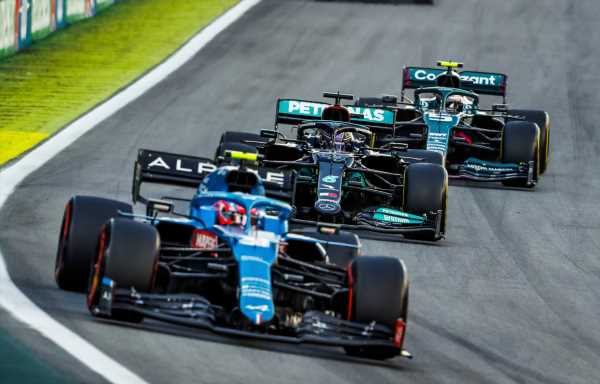 Racing from the back of the grid to P5 in 24 laps on Saturday, Lewis Hamilton could still win Sunday’s Sao Paulo Grand Prix.

That’s according to Toto Wolff, and even Red Bull’s Christian Horner.

Hamilton’s weekend at the Interlagos circuit did not get off to the best of the starts with the Brit slapped with a five-place grid penalty for taking on a fifth ICE.

However, it then went from bad to worse on Saturday when he was disqualified from Friday’s qualifying after his rear wing’s DRS flags were found to have exceeded the maximum gap of 85mm.

Starting sprint qualifying from the very back of the grid, and gambling on the soft Pirellis, Hamilton raced his way to fifth place.

It was an impressive showing, and a timely reminder to his title rival Max Verstappen about why he is a seven-time World Champion.

His team boss Wolff, while still smarting over the qualifying DSQ, says he’s at least feeling a bit happier in the build up to Sunday’s 71-lap race.

“I believe we have a good car here,” said the Austrian. “We’ve seen over 24 laps definitely we didn’t suffer with the tyres.

“Sunday that is a different game again because it’s going to be much hotter. But at least it’s encouraging to see we can overtake.”

But while Wolff is happy, Horner is wary.

The Red Bull team boss reckons Hamilton could yet to pip Verstappen to the win, such is the pace of the W12.

Hamilton will line up 10th on the grid as a result of his penalty with Verstappen second. Valtteri Bottas is on pole position.

“With the speed that Lewis showed in the sprint, he can win the grand prix because it will be difficult to defend against him at this pace,” Horner told Sky F1.

“But of course we will give everything and can only control what we do. We got two points [in the sprint qualifying] and they are crucial.”

Horner again raised questions about how the Mercedes is able to achieve its superior pace on the straights, Red Bull questioning whether Mercedes’ rear wing is legal.

“We will keep an eye on that,” he added, “because today you could see that Lewis was in another world. I think he was 27 km/h faster when he passed Lando Norris. But he showed a great drive.”

Pole-sitter Bottas is betting on his team-mate to come through the field.

“Lewis actually also made it to a good place, so I’m sure he’s gonna play a part as well.”

Hamilton goes into Sunday’s race trailing Verstappen by 21 points in the race for this year’s World title.