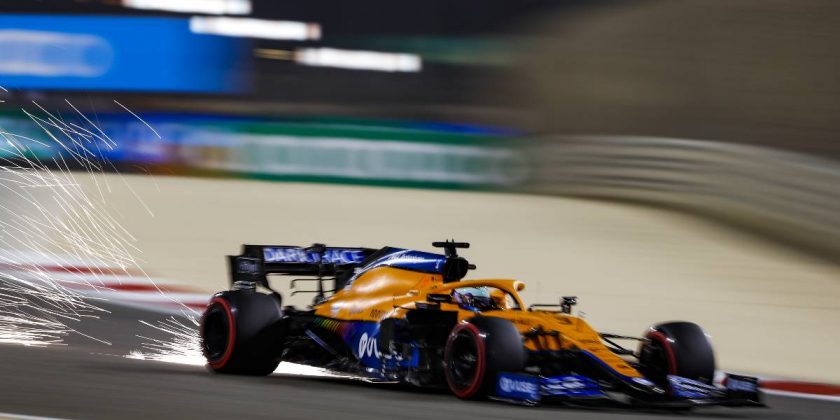 Daniel Ricciardo felt his performance in Bahrain Grand Prix qualifying had given him a “nice little tick” in his McLaren head-to-head battle with Lando Norris.

But he was more concerned with showing the team he is quickly getting to grips with the MCL35M.

The experienced Australian secured P6 on the grid in his first competitive action for McLaren and will start the race one place in front of team-mate Norris.

It represented a turnaround from most of the previous action this weekend in Bahrain as the Englishman had looked to have the early edge over the newcomer to the team.

But when it mattered more, it was the 31-year-old who came out on top among the McLaren duo to give himself a promising starting position for his McLaren race debut.

In doing so, Ricciardo became the only driver who was in F1 action last year and has subsequently switched teams to outqualify their new team-mate at the first attempt.

“That’s a nice little tick,” he said. “But probably more importantly within myself, I made a step today which I know will come over time but obviously you want it sooner than later.

“I did make a nice step today and that’s what I’m most satisfied with. I think I just made progress each session and didn’t over-complicate it. Maybe it’s the 31-year-old in me!

“We started a bit off the pace yesterday, but it’s a process and to make a good difference tonight I was really happy.”

New subscribers to F1 TV Pro can watch the Bahrain Grand Prix for free with a seven-day trial. Sign up here! Please check to see if F1 TV Pro is available in your country.

He added on Sky F1: “I think the more laps I do, the more I’ll feel the car and the limit. I know I’m experienced in the sport, but the truth is it does take time and it will take time to get that last few per cent. I certainly got closer to that tonight and for that I’m happy.

“I think it’s a good start to the McLaren adventure.”

Ricciardo revealed the team were happy too.

“I got a thumbs up,” he added. “I think they have obviously seen from day one of testing and on the timesheets I was quick in those first two days, but I think we knew I was still finding my feet.

“So I think they have followed my progress in the last two weeks and for that I think they are quite happy to see the evolution over a small period of time, so we’ll keep going and hopefully it leads to bigger and better things.”

Qualifying had been difficult to predict and so it turned out, with Max Verstappen putting his Red Bull on pole position ahead of Mercedes duo Lewis Hamilton and Valtteri Bottas, ahead of Charles Leclerc (Ferrari), Pierre Gasly (AlphaTauri) and then Ricciardo.

“It’s a mixed bag this year,” said Ricciardo. “I don’t really know what to expect but it’s a good start.

“We tried to analyse it yesterday and the race pace was pretty close with everyone.

“We saw Charles put in some big qualifyings last year but he didn’t have the race pace to maintain it. I think it’s a different story this year, we’ll see, but I expect him to have decent race pace as well. I think he’ll be there till the end.

“Gasly has a medium [tyre] so that will help him but probably make him vulnerable at the start.

“I guess it’s for everyone at home to scatter through their brains and figure out what will happen tomorrow.

“I’ll sleep a bit better knowing I got a bit more out of the car today.”