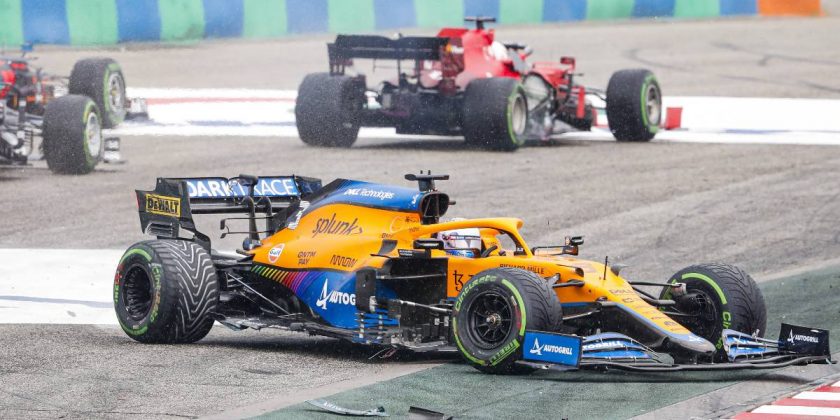 Andreas Seidl has quantified the damage to performance sustained by Daniel Ricciardo’s McLaren in the Turn 1 melee at the Hungarian Grand Prix.

Although he started further back on the grid than most of the others involved in the first-corner incident, Ricciardo found himself caught up in the chaos.

From 11th on the grid, the Australian made a strong getaway towards the outside of a rain-dampened track and avoided the mayhem triggered by Valtteri Bottas which resulted in his McLaren team-mate Lando Norris being forced out of the race.

But there was a second shunt when Lance Stroll drove into Charles Leclerc, who in turn was pushed into Ricciardo’s MCL35M which ended up facing the wrong direction.

Ricciardo was able to get going again and take the restart after the race was red-flagged. But in what had become a wide open race, eventually won by Esteban Ocon for Alpine, he could never become a factor and ended up a lap down in 11th position.

“On Daniel’s car, I think the front wing was damaged, then the bargeboards,” said Seidl, quoted by Crash.net.

“The new ones got damaged heavily and the floor on the side front of the rear wheels on the right-hand side was damaged as well, so huge loss.

“Probably seven, eight tenths a lap, plus obviously the consequences it has then on the stint.”

Asked whether a second pit-stop could have helped Ricciardo’s recovery bid, Seidl said: “I don’t think it would have changed anything.

“We simply didn’t have the pace with all the damage the car had to hang in there until the end. Daniel tried, but he was also stuck behind George Russell for quite some bits.

“He destroyed his tyres and in the end, plus with the damage he had, the degradation was quite a bit higher than normal, so we had nothing left in his hands to fight for anything, unfortunately.”

Daniel’s analysis of today’s action at the #HungarianGP. 🇭🇺 pic.twitter.com/7qwK6wIpFG

Ricciardo was almost left wishing he had joined Norris on the sidelines rather than battling through a draining afternoon for no reward.

“I know that sounds negative, but because you have damage your race is so compromised,” said the 32-year-old.

“Of course you want to do the race to see if you get some points, maybe some other crazy things happen, but it was a very tricky race for us after that.

“It was enough [damage] to make it a long and painful race. We were able to hang on to the points for a while but we couldn’t go through the field.

“It stopped us from attacking. Every time we got close we lost so much more downforce.

“I feel pain for me in the car but also for the whole team. My race and Lando’s race were done. A tough one for the team.”