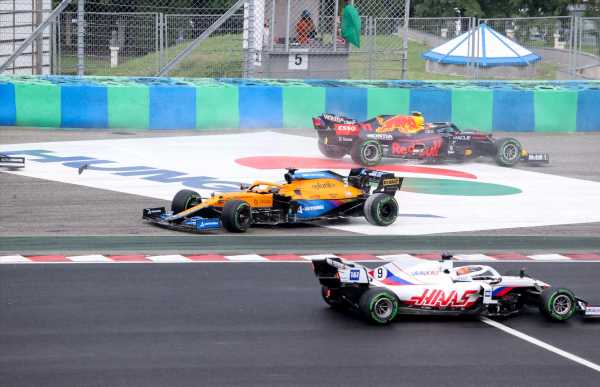 Daniel Ricciardo momentarily thought he had “escaped the mess” that was the opening lap of the Hungarian GP – only to be caught up in Lance Stroll’s crash.

Starting Sunday’s race from 11th on the grid, and calling his qualifying “a bit painful”, Ricciardo had hoped to put in a good recovery drive to go into the summer break feeling more confident.

It was not to be.

The Aussie managed to avoid the initial carnage caused by Valtteri Bottas, who rear-ended Lando Norris, pushing him into Max Verstappen and also hitting Sergio Perez.

But while Ricciardo had a brief moment of respite, it was brief.

“I was halfway around Turn 1 and I thought I’d escaped the mess,” he said, as quoted by Fox Sports.

“I could see one car in front and thought ‘I’m P2! This is amazing!’

“There were a few other drivers making mistakes into the first corner and it cost a lot of us a race… Valtteri obviously cost Lando his race and Lance cost me mine.”

Ricciardo was caught out by Stroll, who also misjudged his braking, crashing into the McLaren and also Charles Leclerc.

Stroll and Leclerc retired as a result of the crash but Ricciardo was able to continue.

However driving a damaged MCL32, he crossed the line down in 12th place.

“There were parts where I could hang on to the cars ahead, but with the car damage we had, and the difficulty overtaking here, it really just limited our race,” Ricciardo said.

“In the end, the tyres were gone, and it was just about trying to hang on for dear life, but I couldn’t hang on to the points.

“It looked very promising, but now, when you look at the race and the chaotic results, you realise you could’ve been up there, but unfortunately not.

“We were one of the many that just got unlucky today through no fault of our own.”

Ricciardo heads into the summer break with 50 points on the board, 63 behind Norris who remains P3 in the Drivers’ Championship despite his first DNF of the season.