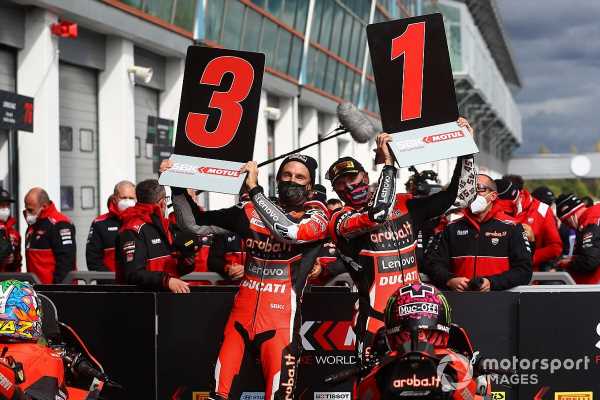 Chaz Davies feels Ducati should recognise the role he has played in turning the Italian marque into a World Superbike title contender when deciding its rider line-up for the 2021 season.

Davies has been a part of the Ducati WSBK stable since 2014, but his seat at the team has come under increasing threat due to the performance of his rookie teammate Scott Redding, who has outscored him so far by 59 points and won five races compared to his one.

This is the second year in a row that Davies has been outgunned by a new teammate after the British rider finished down in sixth place in the standings last year while Alvaro Bautista challenged Kawasaki’s Jonathan Rea for the title.

Moreover, Michael Ruben Rinaldi has enjoyed a strong season with the Go Eleven customer Ducati team, including a victory in Aragon, which has prompted speculation he is in line to step up and replace Davies, 33, in the factory squad.

But Davies believes Ducati should look beyond his results in the series in recent years, and take into account the role he is playing to help the marque claim its first WSBK title since 2011.

Davies resisted the advances of Rea in the closing stages of the second race at Magny-Cours on Sunday, ensuring the Kawasaki rider didn’t finish inside the top three and score the requisite points to wrap up his sixth title a round early.

This means Redding remains in mathematical contention of the title heading to Estoril, although with a 59-point deficit he is unlikely to usurp Rea in the championship battle.

Davies said he knew he had to hold onto third place at Magny-Cours to keep his teammate Redding’s title hopes alive ahead of the final round.

“I knew he was not going to let his challenge roll into Estoril without a fight,” Davies said. “So I was fully expecting a move in the last lap.

“I knew he was taking quite a bit of time out of me through Turn 8, so I closed the door a little bit there, tried to run a bit tighter than usual. And just put it together quite well, on the last lap I did a 1m48.2s, so made him work and make the mistakes behind me.

“It was a lot of pressure on myself on last lap because obviously I knew the points situation with Scott. I knew that if Johnny gets in front of me, that’s the championship done. And also for myself to not settle for fourth place and to try and take extra points out of [Yamaha’s Michael] van der Mark [in the fight for third overall].

“I could have easily [allowed] for Johnny [to pass me]. Alright, I’m not willing to go that far. But I took a few risks for myself to keep this championship alive to Estoril.”