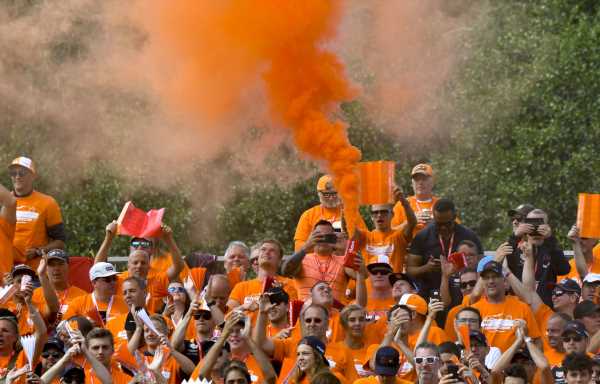 As Formula 1 returns to the Netherlands after a 36-year hiatus, Mick Schumacher has urged the fans to keep the flares “to a minimum please”.

The Orange Army will be out in force this weekend, cheering loudly as, not only is F1 back at Zandvoort, but they have a Dutch driver vying for the World title.

Max Verstappen, who trails Lewis Hamilton by three points in the race for the title, will be the focus of the weekend for most of the fans, who one can expect to be decked out in orange and likely setting off orange flares.

Schumacher has urged them to keep the latter to a minimum, for several reasons.

Speaking to the media in the build up to the race, the Haas driver said: “Everybody’s looking forward to [the event]. Big support.

“[But] I was going to say, I hope there [are] not as many flares because like in Spa, it just all came on to the track.

“It also smells very badly, and it sits in the cockpit all the time.

“So yeah, guys, keep it to a minimum please.”

Esteban Ocon agreed that the flares could be a problem, saying at Spa “we couldn’t see in one corner for the whole race.”

Orange army is gonna be insane this weekend🧡 pic.twitter.com/EnVt4y0RsB

Sebastian Vettel and Daniel Ricciardo were also asked about the flares in their driver press conference ahead of the weekend.

Aston Martin driver Vettel didn’t seem to mind them, saying he hoped to “taste a lot of orange.”

“The Dutchies, they’re always up for a good time,” added Ricciardo.

“Seb said ‘tasting orange’, and I completely understood what he meant.

“I feel like the track is going to be covered in smoke a lot of the time with all the flare guns.”