Fernando Alonso says McLaren’s smart tactic in first practice for the Russian Grand Prix was the “biggest gain” of the weekend for him.

Under current regulations, the grid order for drivers with engine penalties is decided by the order in which new elements are first used on track.

Alonso, who has replaced his engine and will start from the back of the grid, will line up 16th thanks to Lando Norris – driving the Spaniard’s car in FP1 – being first in the queue to leave the pits ahead of the start of the first session of the weekend.

“Yeah, that’s the biggest gain we did the whole weekend, four positions in FP1,” joked Alonso, who finished in 17th place in today’s grid-deciding session.

“Tomorrow hopefully we can fight for points. We know this circuit is tough for us.

“We knew that coming here and that’s why we took the penalty, but at Monza we were uncompetitive and we retired the car when we were P11, so I think tomorrow the points is still the target,” he added.

Alonso finished half a second ahead of teammate Stoffel Vandoorne despite saying his main focus for qualifying was to assist the Belgian make it to Q2 with a tow.

The Spaniard called the result “a coincidence.”

“It was a coincidence because the first lap I did it without the qualifying mode on, without anything and with a lot of fuel, and then the last time we were out on track I was running with used tyres just to give him a tow in the first straight.

“But the positions were already set for tomorrow so we just tried to be within the 107% to avoid problems and after that I tried to help Stoffel.

“He couldn’t make it to Q2 but he’s starting ahead of me tomorrow anyway.”

McLaren tried some extreme set-up solutions in practice in order to try to improve its straightline speed given its known problems with excessive drag this year.

Alonso said the tests proved useful, but admitted it was not enough to make a significant difference on a track like Sochi.

“I think we did improve the car. Definitely we found some solutions that made the car faster, but obviously not fast enough.

“We are still quite down in terms of performance in this kind of circuit.” 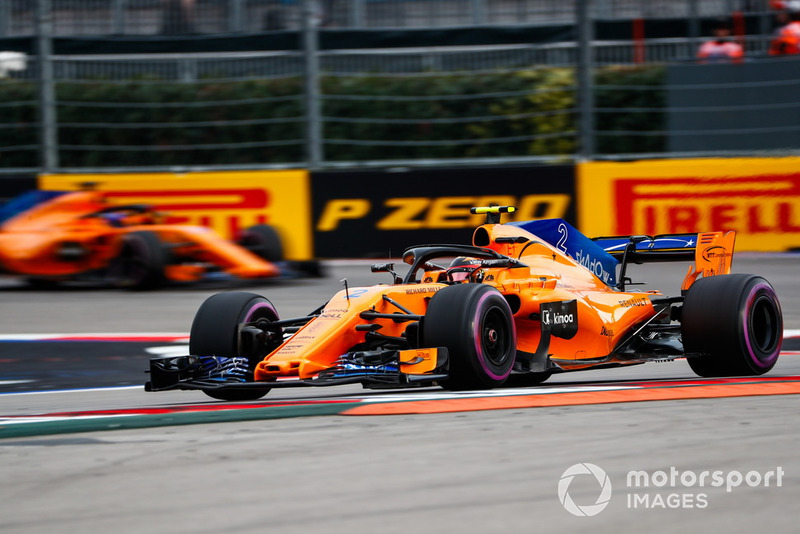