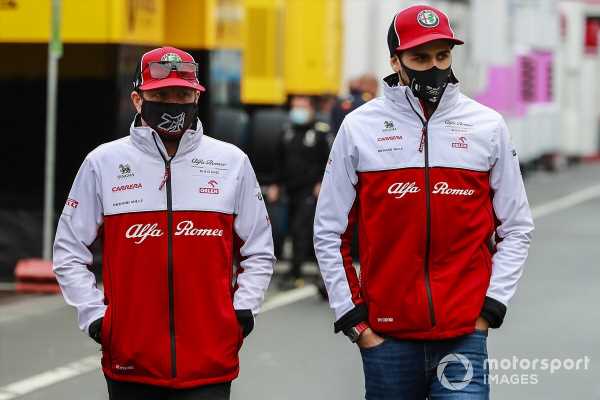 Kimi Raikkonen and Antonio Giovinazzi will remain together at the Alfa Romeo Racing Formula 1 team for a third consecutive season in 2021.

Motorsport.com revealed prior to the Eifel GP that Raikkonen is set to stay at Alfa Romeo in 2021, but the team was still undecided on his teammate.

Sergio Perez was in the frame at one stage after being dropped by Racing Point, and the Mexican had obvious appeal given the commercial package that comes with him. Perez’s options now appear to be Williams and Red Bull Racing.

Mick Schumacher, whose Friday test outing for the Swiss team at the Nurburgring was rained off, also appeared to be in with a shot at landing the Ferrari-owned seat currently occupied by Giovinazzi.

However sources suggest that the FP1 session was never meant as a precursor to an Alfa race seat, and the German is now set to join Haas, Ferrari’s other customer team.

Raikkonen, who turned 41 this month, will celebrate the 20th anniversary of his rookie F1 season next year.

He has made it clear for some time that the decision to carry on was his to take, and his first lap charge at last weekend’s Portuguese GP indicated that he’s still fully motivated.

“Alfa Romeo Racing is more than a team to me, it is like a second family,” said Raikkonen.

“So many of the faces that were around me when I made my F1 debut in 2001 are still here and the unique atmosphere of this team is what gives me that extra motivation to keep going in what will be my 19th season in the sport, next year.

“I wouldn’t be here if I didn’t believe in the team’s project, and in what we feel we can achieve together. This is a team that values hard work over words and this fits well with my style: I am looking forward to next year and hopefully making some steps forward towards the front of the midfield with the team.”

Giovinazzi has had mixed fortunes this year, but he scored points in the Austrian and Eifel GPs, and has clearly done enough to maintain the support of Ferrari, despite the strength of the Maranello marque’s Academy drivers who are coming through the ranks.

“Alfa Romeo Racing has been my home in F1 for the last two seasons,” said the Italian. “And I am happy this relationship can continue for one more year.

“The team has put a lot of faith in me and I have done my best to repay this confidence with hard work and commitment.

“We have achieved some good results and I feel I have done my part to make the team progress, but the road ahead is still long and there is much more we want to achieve together.

“There will be a lot of continuity between this season and the next one, so everything we work on between now and the end of the year will already count for next, and we are ready to give it all we have.”

Team principal Fred Vasseur made it clear that the two drivers form a strong partnership.

“I am very pleased for the team to continue working with Kimi and Antonio for another season.” said the Frenchman.

“Kimi is a driver who needs no introduction. His talent has been clear to everyone since 2001, and I still see the passion and motivation in him every time I see him at work.

“He can be trusted to deliver 100% of what the car can produce and he is a true leader for the people working around him.

“Antonio finished last year’s campaign strongly and he picked up where he left off and kept improving throughout 2020.

“From the track to the engineering briefings, Antonio has played a crucial role for our team, and he has thoroughly deserved a new contract for 2021.

“His work ethic, commitment to the team and contagious enthusiasm are a huge asset for Alfa Romeo Racing.