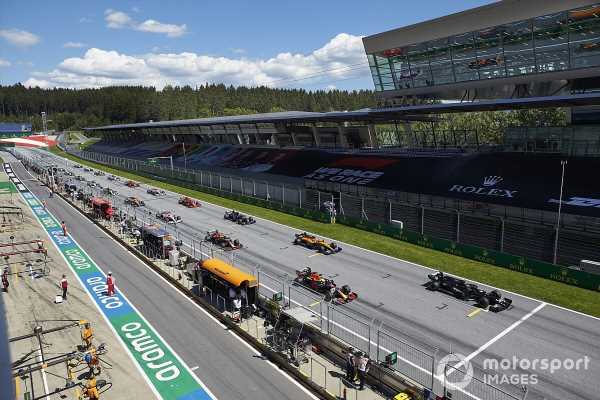 Formula 1 is set to stage a 23-race calendar in 2021, featuring two triple-headers and adding Saudi Arabia as the Dutch Grand Prix moves to an autumn date.

After the 2020 schedule was heavily revised as 13 races were cancelled due to the COVID-19 pandemic, F1 has been clear in its plan to run a calendar next season that is closer to normal.

Teams were handed a first draft of the schedule in an F1 Commission meeting on Monday, featuring all 10 competitors as well as officials from F1 and the FIA.

Motorsport.com has learned the provisional calendar for 2021 features 23 races, adding a grand prix in Saudi Arabia to the existing 22 rounds that were planned for this year.

The 2021 F1 season is scheduled to start in Australia on 21 March, followed by the Bahrain Grand Prix one week later.

A two-week gap will follow before the Chinese Grand Prix on 11 April, with the inaugural Vietnam Grand Prix set to be held two weeks after that.

One of the biggest changes from the planned schedule in 2020 is a shift of the Dutch Grand Prix at Zandvoort to an autumn date slot.

The race had been due to open the European season at the start of May this year, but will now form part of a European triple-header with the Belgian Grand Prix and the Italian Grand Prix after the summer break.

It means the Spanish Grand Prix returns to its traditional status as the first European race of the year, taking place on 9 May before Monaco on 23 May.

Azerbaijan will maintain its planned switch to a June slot from 2020, pairing up with the Canadian Grand Prix in Montreal, before the regular run of European events in France, Austria, Great Britain and Hungary, the latter hosting the final race before the summer break on 1 August.

The dates for the second half of the calendar remain fluid, but there is set to be a second triple-header formed by the races in Singapore, Russia and Japan.

Although the eventual 2020 calendar featured four triple-headers, including a run of nine races in 11 weeks to start the season, teams had warned running races on three straight weekends could not become the norm in the future.

F1 first attempted a triple-header in 2018, running races in France, Austria and Great Britain on consecutive weekends, but had agreement from teams not to do so again due to the pressures it placed on personnel.

By forming a triple-header with Singapore, Sochi and Suzuka, F1 has created an extra one-week gap in the calendar for the event in Saudi Arabia to join the schedule, with a street race in Jeddah planned for late in the season.

It will see F1 become the latest major international series to stage an event in Saudi Arabia following similar moves in Formula E – which has hosted its last two season openers in Diriyah – as well as sports such as boxing and football.

The race is set to mark a first move into Saudi Arabia for F1 amid plans to construct a new circuit in Qiddiya on the outskirts of Riyadh in the future.

The Brazilian Grand Prix is set to move to Rio de Janeiro for 2021, although the race is currently subject to pressure from environmental groups over the plans to build the circuit.

Despite concerns about the viability of some events due to the uncertain nature of the ongoing COVID-19 pandemic, F1 has not officially informed teams of any potential back-up races as it hopes to stick to the planned schedule.

Pre-season testing is also set for a shake-up, with at least one test moving from Barcelona to Bahrain next March prior to the season opener in Australia.