Renault Formula 1 driver Carlos Sainz believes Force India remains a threat in the constructors’ championship despite having its points reset to zero.

In the tight battle for fourth place – which also yields a seat on F1’s influential Strategy Group – Renault has 91 points compared with 76 for Haas, while McLaren remains in touch on 58.

But Force India, which started again from zero points at the Belgian Grand Prix because of a technicality relating to the team’s change of ownership, is already on 32.

The gap might even have been narrower had Force India’s Sergio Perez not taken out teammate Esteban Ocon on the first lap in Singapore, setting in motion a chain of events that left them empty-handed.

“Our target was to finish fourth in the constructors’ and if it was not for the penalty they suffered [the points reset] they would be ahead of us by pure performance,” Sainz told Motorsport.com.

“We need to be very careful with Force India. We know that in the second half of the season they always start to come alive and they’ve proved it once more – once they’ve got a bit of money and everything.

“A track like Singapore where we expected to be ahead, we’re behind.”

Force India’s financial problems earlier in the season had stymied the team’s research and development slightly, but the bigger impact on performance came through the team’s reliance on outside contractors to fabricate new parts. Many of the engineers’ ideas therefore remained in the virtual space while unpaid suppliers withheld their services.

Since its acquisition by a consortium of investors led by Lawrence Stroll, Force India has been able to begin introducing long-planned performance steps. In Singapore it added a host of new parts and both Perez and Ocon outqualified the Renault drivers by a healthy margin.

Renault’s development has followed a different path. It is unlikely to introduce many chassis updates in the final rounds, having chosen to switch tack to 2019 development early.

Other developments, such as new bargeboards introduced in Singapore, have not delivered the uplift the drivers needed.

“You feel something, but not enough,” said Sainz’s teammate Nico Hulkenberg. “I think we wanted more.”

“We know our car is strong in low-speed corners,” Sainz said. “We generate quite a lot of grip and load in low-speed, but we know our ride through kerbs and bumps is not where it should be compared with other teams. We keep working on it but it’s probably still our main point.

“A big part of it is also the engine, we’re stuck with the B-spec [because changing would bring grid penalties] and the others have brought massive steps during the year which we haven’t been able to bring.

“We’re going to make sure we give everything to hold onto that P4. It’s going to be a tough second half of the season.” 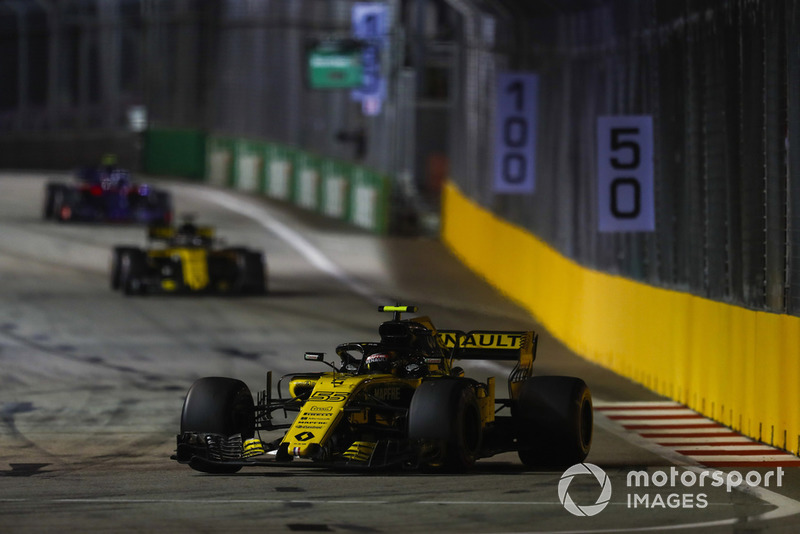