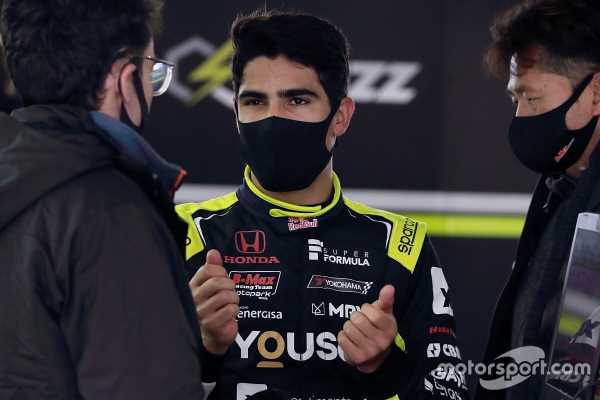 B-Max Racing driver Sergio Sette Camara, who caused two red flags during a tricky day of practice on Saturday, initially missed out on escaping his Q1 group, which was disrupted by a crash for Nakajima Racing driver Toshiki Oyu at SP Corner.

But when Oyu had his time erased for causing the red flag, Sette Camara was able to advance to Q2 after all, and the Brazilian proceeded to set the fourth-fastest time in that session to progress to the eight-car Q3 pole shootout at his first attempt.

Sette Camara then set the fastest time of the day of 1m04.235s to beat Ryo Hirakawa – the poleman for the opening two rounds of the season and again fastest in practice on Saturday – to the top spot by just 0.053s.

It was also a first Super Formula pole for the B-Max team, which is operating just one car this weekend in the absence of most of the staff from partner squad Motopark.

Kondo Racing rookie Sacha Fenestraz continued his streak of top-three qualifying placings with third, just 0.090s off the pace, while reigning champion Nick Cassidy (TOM’S) took fourth on the grid in his first Q3 appearance of the year.

Tomoki Nojiri, also making it to Q3 for the first time in 2020, was fifth for Team Mugen ahead of the second TOM’S car of Kazuki Nakajima, Kenta Yamashita (Kondo) and Ukyo Sasahara (Mugen), who is again standing in for Red Bull junior Juri Vips this weekend.

Yuhi Sekiguchi (Impul) was fastest of those to drop out in Q2 following an off at High Point corner, followed by the winner of the last two Sugo races and the lap record holder, Dandelion Racing’s two-time champion Naoki Yamamoto.

The pair will share the fifth row of the grid, while Okayama winner Sho Tsuboi (Inging) could manage no better than 13th this time.

Oyu being demoted to the back of the grid elevated Nirei Fukuzumi (Dandelion) to 15th on the grid ahead of Drago Corse stand-in Koudai Tsukakoshi, Inging’s third driver Kazuya Oshima and Kamui Kobayashi (KCMG), who was slowest in his Q1 group.