Sauber’s development rate this season has transforming the team from a backmarker into a midfield challenger.

The progress has given the team a strong foundation ahead of the arrival of current Ferrari driver Kimi Raikkonen in 2019.

Sauber’s technical director Simone Resta is now well established, and the signs are promising for its future judging by the rate of development the team has had this year. 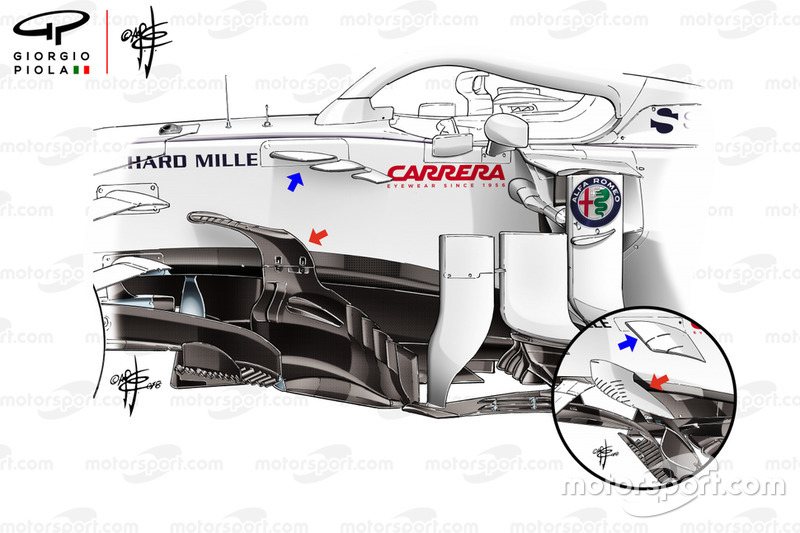 The team has continued to develop ideas for the C37 this season, with a new bargeboard configuration utilised in Russia as seen above.

Similar to the design originally introduced by McLaren, and subsequently copied by several others, the bargeboard’s leading vertical element now arches over to meet the chassis (red arrow), replacing the boomerang winglet previously sited there (inset).

While there appears to be two unnecessary slots on the surface, they are there to comply with regulations and match the serrations in the bargeboards footplate below.

The arched section of the bargeboard effectively becomes a continuation of the upper wishbone, guiding the airflow down into the desired location.

In a similar fashion, the team made changes to the chassis winglets in Germany, altering the flow direction to coincide with the wide-scale changes to the sidepod and the inlets downstream. 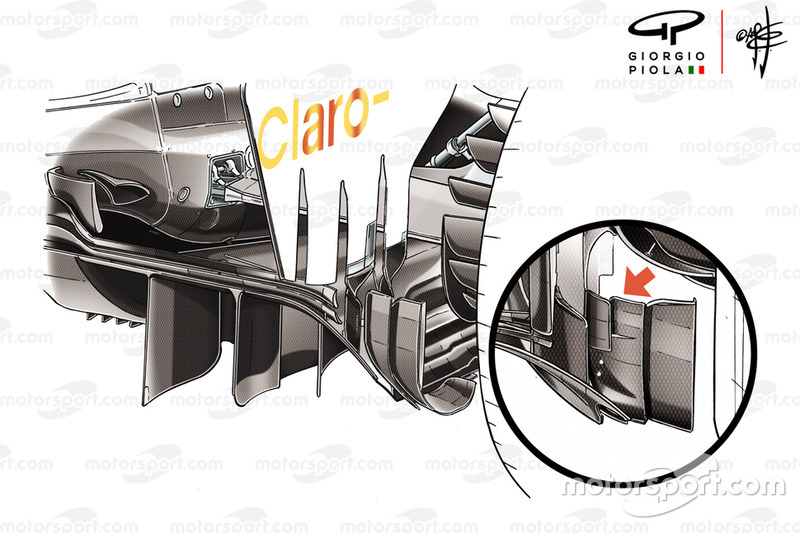 The diffuser has been revised in recent races to improve the strength of its effect and the consistency of it.

The aggressive designs used by teams in the outer section of the diffuser continues to impress, but Sauber continues to tread its own path by utilising horseshoe-shaped flaps that interact with the airflow already worked by the rear brake duct fins.

The latest update was first fielded in Hungary and is a continuation of a development first introduced at Monaco.

This had the outer upturned flaps pushed back in line with the diffuser and merged with the base of the rear wing, creating aggressively angled strakes at the base.

The newest specification also had a slot added to the inner flap (arrowed, inset), which is the perfect example of how teams study the aerodynamic detail with microscopic attention.