It has been decades since Porsche last took on the challenge of grand prix racing, and while it has won a race as a factory entrant, and multiple titles as an engine supplier to McLaren, its most recent works F1 effort was a total disaster.

Despite its amazing history in sportscar racing, Porsche has only ever dabbled in single-seaters. A modified 550RS first appeared on the German Grand Prix grid in 1957, and some RSKs raced sporadically in ’58 and ’59. 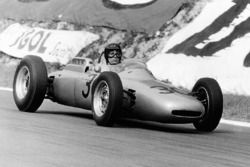 The first attempt as a full works team was not without success – Dan Gurney finished third in the 1961 world championship and took a pole and a win in ’62 (right), before the team withdrew.

Over two decades later Porsche returned as a paid partner of McLaren. For a brief period the TAG-badged V6 set the pace, winning three titles and 25 races from 1984-86, before the Woking team went with Honda for ’88.

In contrast Porsche’s third effort in 1991 with an uncompetitive and badly flawed V12 lasted less than half the season, and proved so catastrophic that it hasn’t been back since. 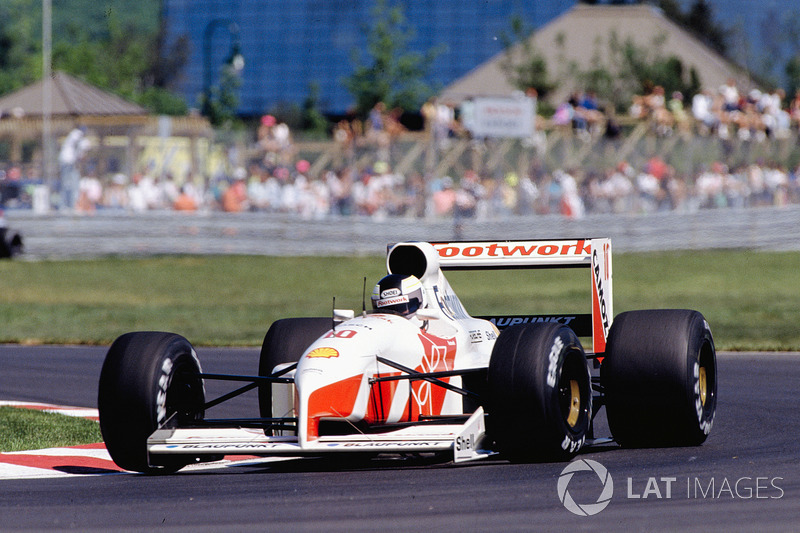 The 3512 was Weissach engine wizard Hans Mezger’s response to F1’s switch from turbo to normally-aspirated power. Porsche had originally entertained hopes of persuading McLaren to use it, and the team was given a briefing in 1987.

“One of the Porsche engineers had this briefcase, and he took out this single drawing, which was the general layout of the engine,” recalls former McLaren man Steve Nichols. “He started unfolding and unfolding. I just looked at this thing and thought ‘how bizarre’. It was like they’d taken two of our little V6 engines, and stuck them together.

“It was quite wide, and quite tall, and it was just l-o-n-g. And it had gear drives up through the middle where they’d stuck the two V6s together, and a shaft that came out through the vee. So the gearbox was going to be way up high to accommodate that. I came out of the meeting and said to Ron Dennis, ‘Sign the Honda contract.’ It just looked like it had no future…” 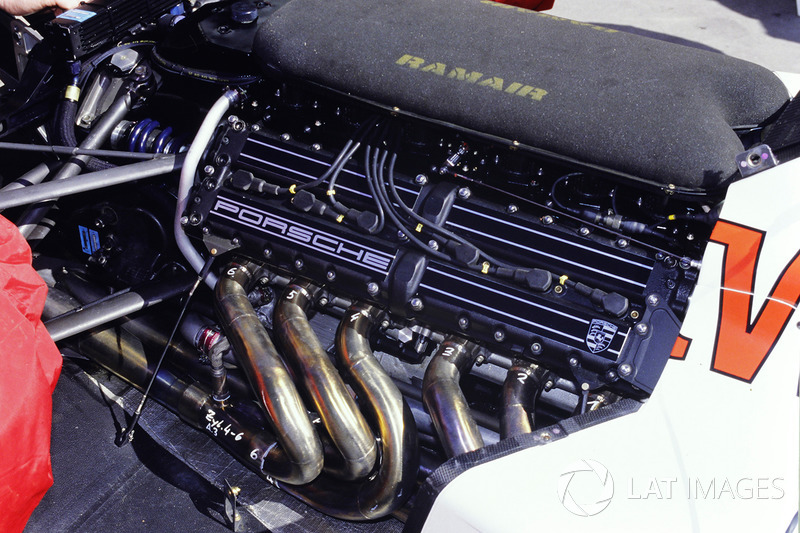 Porsche disagreed, and over the next couple of years it looked for a new partner – and someone with the cash to finance an F1 project. The man with overall responsibility was Ulrich Bez, at that time Porsche’s executive vice-president of R&D.

“Hans Mezger was one of the ‘popes’ of F1 engine design,” Bez recalls. “I just simply trusted in his know-how, capability and capacity when he said he had a great idea for an engine which could compete in F1. So, I looked for financing, because this was a time when Porsche was not as profitable as it is today. We didn’t have the money to do it ourselves.”

The top contenders already had engine deals. However, wealthy individuals were investing in lesser teams. One was Jean-Pierre Van Rossem, who bankrolled the new Onyx outfit in 1989. He nearly signed up with Porsche, but following an uncomfortable meeting at Weissach, Van Rossem walked away from the deal.

Bez turned instead to Jackie Oliver, co-incidentally a factory Porsche driver back in the 917 sportscar era. He had recently pulled off a coup by selling his Arrows team to Japanese entrepreneur Wataru Ohashi, while staying on to run it under its new Footwork name.

“They approached me after the teams they wanted didn’t want to do it,” Oliver recalls. “We had two choices. There was the new small Ford HB V8, or the Porsche. I told Ohashi of those two options, and he said, ‘Porsche!’ I said, ‘It costs more money.’ ‘It doesn’t matter…’ Stars came into his eyes.”

Bez travelled to Japan, surviving a prophetic scare when the landing gear of his plane failed on take-off after an Alaskan stopover, and on February 4 1990 duly Ohashi signed a contract for Footwork to use the Porsche engine the following season. 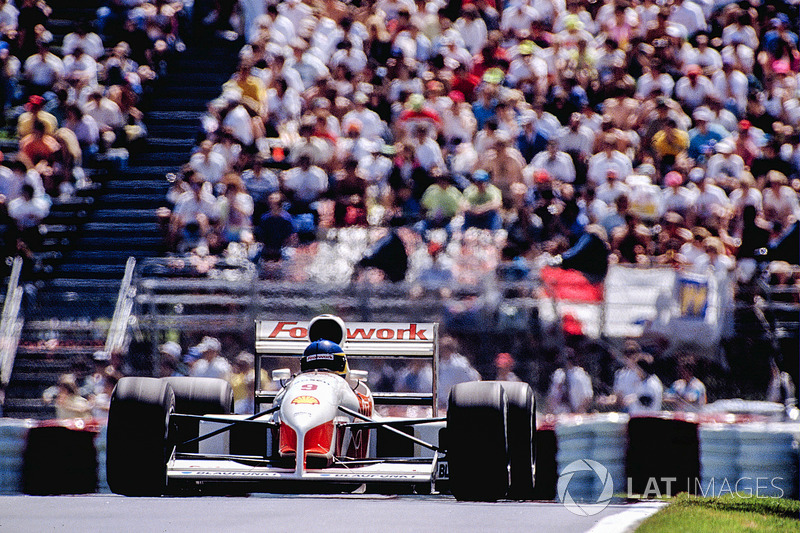 “The initial payment for the first season in 1991 was $20million in four instalments, starting in June 1990,” says Oliver. “Then it was $23m for 1992, and $25m for 1993. I came back from Japan with the money and Ohashi’s enthusiasm, and we’d got into the contract before I’d even gone to Weissach to ask Hans Mezger what the engine was like.

“There was nothing to see. All I could see was Mezger being pushed to meet the date in the contract that wasn’t feasible. It wasn’t anywhere near being completed, and had not even been dyno tested. That made me feel a little bit guilty that I’d got Ohashi, the new owner of my team, into something that he was going to pay for right from the grassroots, rather than it having been proven as something that was worthwhile selling.”

Porsche had ambitious plans, including using a version of the PDK twin-clutch gearbox used on the later 962s, and an advanced diff. But as 1990 went on, and more information gradually emerged from Weissach, Oliver and his chief designer Alan Jenkins realised that they were in trouble with the basics. When they finally got their hands on the Porsche engine the weight came as a shock – it was way above the 150kg outlined in the extended contract.

Everyone put on a brave face when the 3512 was officially unveiled at Ohashi’s home race at Suzuka in October. But in November, at Oliver’s instigation, Jenkins wrote to Mezger outlining his concerns, gently suggesting that with Footwork’s help Porsche should already start from scratch on a second-generation 1992 engine.

The letter got short shrift from Mezger. Later, Jenkins would resort to borrowing a Cosworth DFR from Brian Hart and having it weighed in front of Porsche’s engineers at a Paul Ricard test. 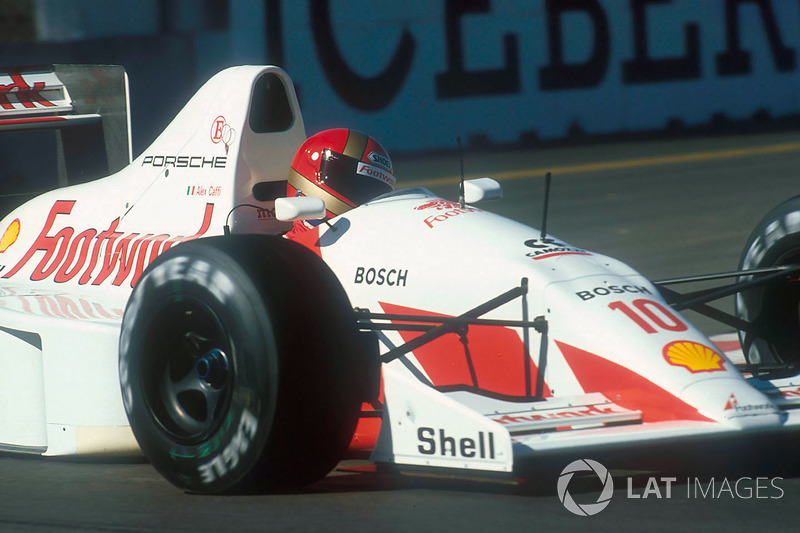 The team started 1991 with a modified A11C chassis, originally designed by Ross Brawn in 1989. Testing was disastrous – the V12 proved to be gutless, and hopelessly unreliable, beset with a fundamental oil scavenging issue. Drivers Michele Alboreto and Alex Caffi were left floundering. Alboreto somehow qualified in Phoenix, only to retire early.

“I took the responsibility, because I was head of engineering,” says Bez. “On the other side if I would have questioned Hans Mezger’s capability at the very beginning, and said, ‘This is not going to go anywhere,’ who would have believed me? He was a hero, so we protected him, not blaming him.”

The new FA12 chassis was readied for Imola, but matters weren’t helped when Alboreto had a huge testing accident when the front wing failed. Caffi then suffered a huge crash in practice in Monaco. 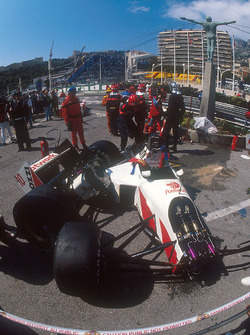 Jenkins tried address the problem with the help of engineer Wolfgang Hatz, and they were forced to hide at the official end of the Weissach working day, dodging the security guards, so they could work on a rig.

The F1 project came to a grinding halt shortly after a test where Footwork ran an old A11B with a DFR – and it went considerably quicker than the Porsche went on the same day.

“It was a demonstration to embarrass Porsche and say, ‘Look, we’re in trouble with this,'” says Oliver. “I think on reflection it was probably a bit too aggressive. I would have liked Porsche to have a second bite at the cherry, but I don’t think they wanted to. I don’t think there was any road back for them.”

Porsche had even sent someone to Osaka to meet Ohashi, tell him that his team was the problem, and suggest that he take his money and the engine to Jordan. Ohashi stuck to his guns and reported the conversation to Oliver, pointedly asking him to pass on a ‘No thanks’ message to the management. The Footwork/Porsche relationship had completely broken down. 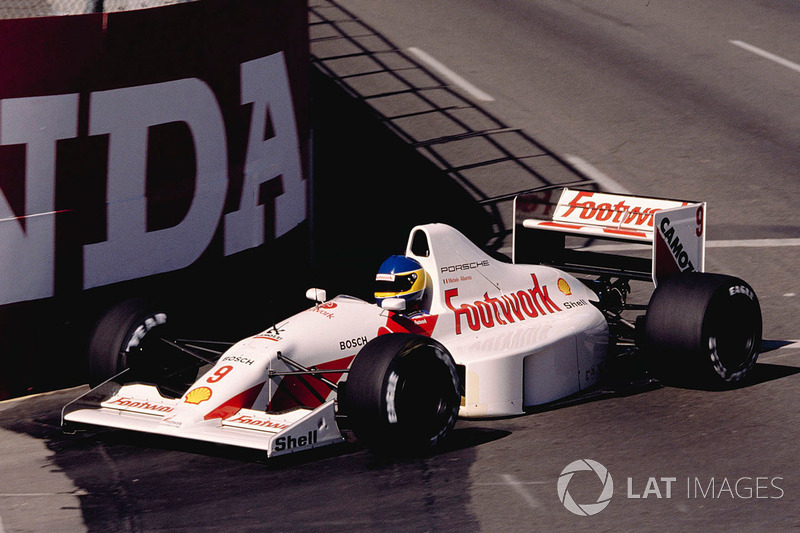 “I went with my lawyers to Weissach to talk about a breach of the contract,” says Oliver. “And not complying with the terms of the annex, with the idea of getting a moratorium on the payments until such time as the engine was sorted out. That meeting didn’t go very well, and they said you’re in breach of contract, and we’re putting an end to the arrangement with Footwork because of you, Mr Oliver.”

For the remainder of 1991 Footwork raced the FA12 with DFR power, and the V12 was not seen again. It was subsequently accepted by Porsche that the 3512 had not met the targets set out, as Oliver recalls: “That little annex got Ohashi all his money back and saved me from bankruptcy. All of those five criteria were not met.”

Jenkins was told years later by Hatz that Porsche never saw more than 510bhp on the dyno. Bez had originally sanctioned an alternative design project for 1992, without Mezger’s involvement. But there was a bigger picture.

“It was would we go a second time, or would it better if we concentrate our efforts on the Porsche 993, which is going to save the company?” he recalls. “I had the task now of replacing the 911 with a new concept, like going from the VW Beetle to the Golf.

“Porsche had to protect its future, and normally those things drive a decision. Better that F1 failed than the 993 failed. If the 993 failed, then the company would be dead.” 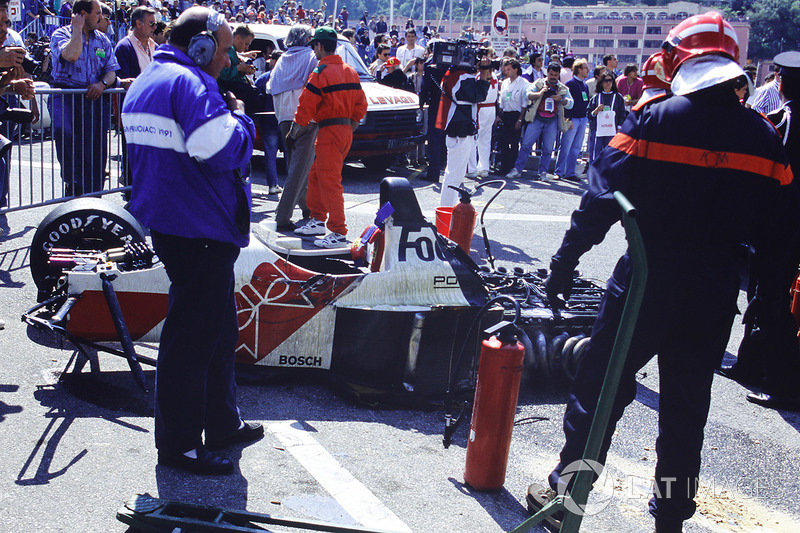