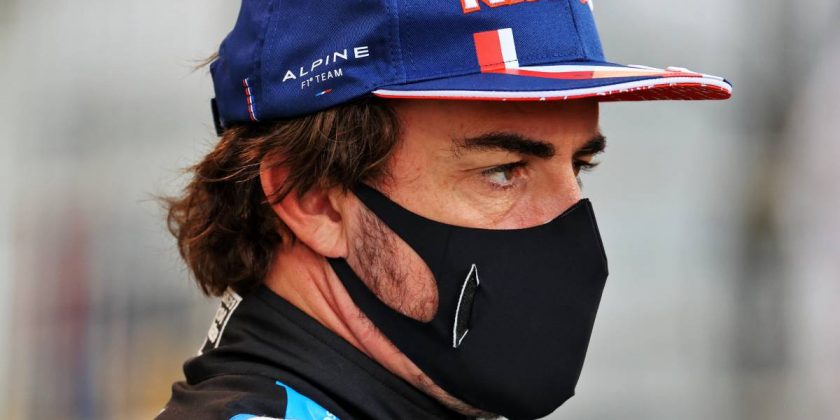 After the flashes of brilliance, ex-F1 racer Jolyon Palmer said the Fernando Alonso of the McLaren days sadly re-emerged in Bahrain.

After two seasons away from Formula 1 Fernando Alonso made his return with the Enstone-based Alpine team, formerly known as Renault.

Alonso was very familiar with the Renault name, having won both of his World Championships with the outfit in 2005 and 2006.

And although it was clear in Bahrain that he has not returned with a car capable of winning the title, Alonso nonetheless was enjoying a very strong Bahrain Grand Prix, making Q3 and then taking the fight to his rivals in the race. It was like he had never been away.

But, in the end he began to drop back from these battles and was forced to retire due to a sandwich wrapper getting caught in the brake duct.

That being said, Palmer has a feeling that Alonso would have happily parked the car up at that stage as he slipped from the top 10, saying he saw the side of the Spaniard which came out in the prelude to his exit back in 2018.

After burning the bridges with Honda, Alonso later walked away from McLaren at the end of 2018, frustrated with the lack of progress from the team.

Palmer felt that Alonso was again putting his desire to push the car for every drop of performance over scoring points at the end. With Esteban Ocon finishing P13, it meant Alpine leave Bahrain on zero.

First race of the season ✅.
It was nice and special to feel the adrenaline of the start, first laps etc. enjoyed every moment until we had to stop the car unfortunately . Can’t wait for the next one and keep progressing 💪. @AlpineF1Team 💙#f1 #bahrain #alpine pic.twitter.com/X8zA6TY4kL

“I don’t know if Alonso would have minded parking it up halfway through the race,” said Palmer on the Chequered Flag podcast.

“He’d had his scrap, it was typical Alonso, putting it all on the line in the opening laps, getting in amongst the McLarens, the Ferraris, and you just thought ‘he is coming alive from nowhere’.

“The guy who made Q3 when we didn’t know he could definitely make it out of Q1, it was a very Alonso-ish weekend, but sadly also then in the way that it all petered out into nothing.

“He was outside of the top 10 and parked it up halfway through, it was Alonso from the McLaren years sadly.

“All getting the most he could out of the car from what we could see, but no points, and the team no points, they are struggling.”

The next stop for Formula 1 is Imola, a venue where Alonso has tasted victory before. So both he and Alpine will be hoping it provides the platform for them get off the mark for 2021.