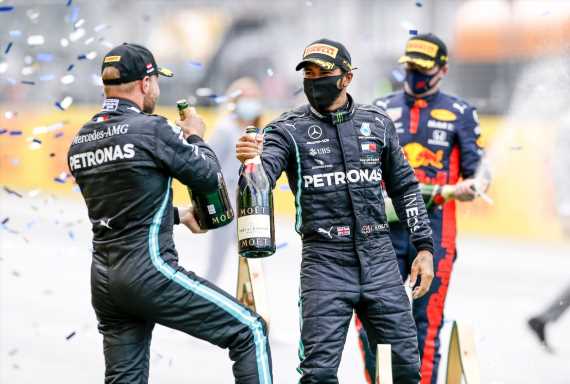 Ex-Formula 1 team boss, Flavio Briatore, says fans want to see the drivers be “gladiators” against each other rather than having them bow down to Mercedes.

The Silver Arrows has won every race so far in the 2020 season and won every Drivers’ and Constructors’ title since 2014. With Red Bull and, even more notably, Ferrari not able to keep up with the pace set, Mercedes will be adding another two trophies to the cabinet come December.

Mercedes team principal, Toto Wolff, is well aware that the team are “not making any friends” with their continued dominance but they will not let complacency to sink in for a single second and potentially allow their rivals a chance to dethrone them.

Briatore says the focus on technology, and how Mercedes has been able to master the turbo hybrid era, has come at the expense of driver skill – the actual battle that the fans want to see.

“More technology exists in Formula 1, and that’s right on the one hand,” Briatore said in an interview with Betway.

“But on the other, if you want to see the real Formula 1, for me it is the difference between drivers who are gladiators and who are not.

“Theoretically, if all the cars were the same, let’s take for example GP2, I made it together with Bernie Ecclestone and the cars are the same.

“If you give these cars to Hamilton, Alonso, Vettel, Verstappen, the best 7 or 8 drivers, you will see incredible races. When the race ends there would be just a tenth of a second between one and another.

“Yes, technology is important, but technology always leverages the driver’s skill. This is what we have to think about.

“Now you have the dominant team, Mercedes, and they have been good for years, I mean, you can’t argue with that.

“But this is not what people want to see.

“So the more technology there is, the less spectacular the sport will be.”