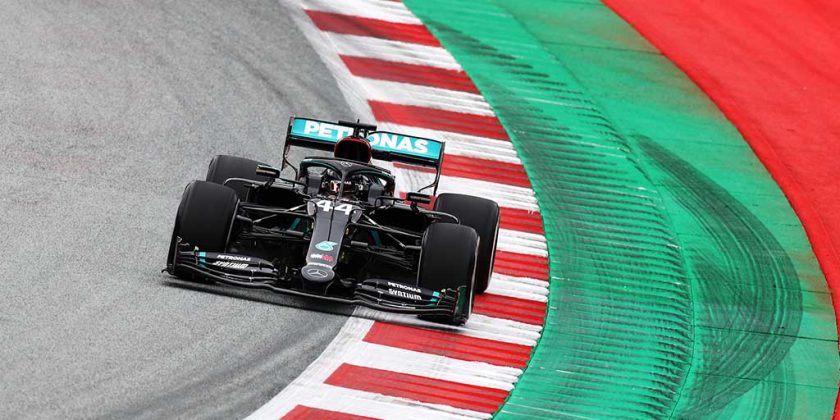 Mercedes continued to set the early pace on Formula 1’s return in Austria with Lewis Hamilton leading another Silver Arrows 1-2 in FP2.

Hamilton improved on his best Friday morning time by half a second to maintain his place at the top of the timesheet with a 1:04.304, nearly two tenths clear of team-mate Valtteri Bottas.

Rather curiously, rounding off the top three was Racing Point’s Sergio Perez, ahead of Sebastian Vettel and Daniel Ricciardo.

Other stand-outs on the timesheet, and not for particularly good reason, were Max Verstappen down in P8 and Charles Leclerc in P9, both nearly a second off the pace.

There were some dark, brooding clouds over the hills of Styria as FP2 got underway but the track was dry after some early Friday morning rain.

Haas’ Romain Grosjean, who missed a huge chunk of FP1 with a brake issue, was the first to burst out of the traps and eager to make up for lost time.

Aside from a couple of spins by AlphaTauri’s Pierre Gasly and Williams debutant Nicholas Latifi, it was a calm start to proceedings at the Red Bull Ring. Sitting top of the pile ahead of the qualifying sim runs was Lewis Hamilton with a 1:05.095, on the medium tyres, which was two tenths clear of Verstappen.

Renault’s Daniel Riccardo was the only driver at this stage who had yet to set a time.

Racing Point’s Perez was the first to set an eye catching time in the qualifying sim runs, especially after he was able to go quicker than Sebastian Vettel by 0.016 seconds to shoot up to P3 behind the two Mercs.

Once Hamilton and Bottas slipped on the red soft tyres, they re-established their dominance at the top of the timesheet – the former managing to improve his time by seven tenths to stay in P1.

Verstappen remained firmly down the timesheet during the qualifying sim runs, down in P8 and nine tenths off the pace, with Turns 6 and 7 proving particularly problematic forcing the Dutchman to abort his performance run.

The main headline from the long runs in the remaining 30 minutes was Bottas having to stop his race sim run with 10 minutes on the clock after reporting an issue with his gearbox.

But that won’t detract too much away from a very strong start to the season for the Silver Arrows. A Mercedes-powered top three heading into final practice and qualifying on Saturday…