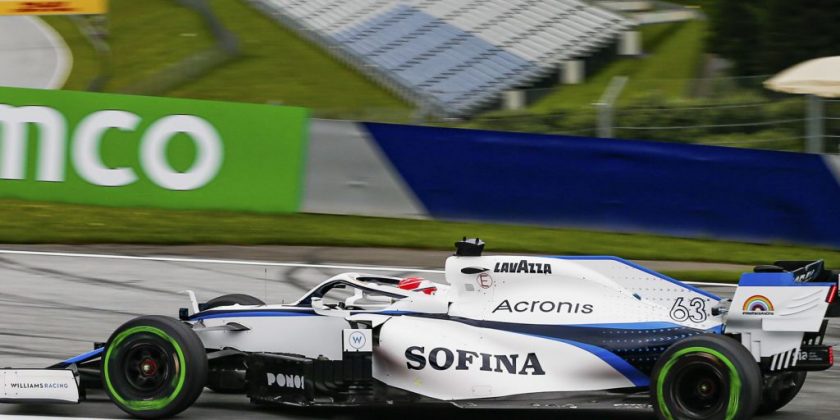 George Russell said he was and remains against reverse-grid races in Formula 1 because he’d be made to look an “idiot”.

The Briton has looked more competitive in 2020 now that Williams has taken a step forward with their FW43, coming close to Q3 on two occasions so far this year.

Race pace though is still a concern with the team still not quite at the level of their midfield rivals in long runs.

So, surely the idea of reverse-grid races to shake-up the pecking order would have been an attractive proposition for Russell?

Well, actually the opposite, as he feels it would harm his reputation as the faster cars flooded past him during the race.

In his words, he would be left looking like an “idiot”.

“Some would think being in the slowest car I’d want a reverse-grid race, it’s actually completely the opposite,” he told reporters ahead of the British Grand Prix.

“If I was in the quickest car I would want a reverse-grid race because it will make me look like a hero going through the field, lunging everyone from miles back.

“But for me in the slowest car on the grid, sat at the front like a sitting duck, I’ll be made to look like an idiot.

“So I’m actually very pleased we don’t have a reverse-grid race.”

There were also concerns from some when the idea was proposed again before this season started that the concept was a “gimmick” that F1 didn’t need.

In the end only Mercedes opposed the idea, meaning it couldn’t be brought in, and Russell shared the opinion of his parent team that it wouldn’t have been in the best interests of Formula 1.

“I think it’s great for F2 and F3, when you are a younger driver, learning your trade, you are in equal machinery and it gives you a second opportunity throughout the weekend,” he explained.

“But equally, in those championships I feel like it’s unfair when some drivers win three races a year but they are three sprint races, or three reverse-grid races, because it’s fallen correctly for them.

“They’ve finished seventh or eighth in a number of events and they find themselves on the front row in Monaco and go off to win a race in Monaco, which lives long in the memory, when a driver who potentially finished second or third and is much more deserving of a race win in Monaco doesn’t get that joy.”