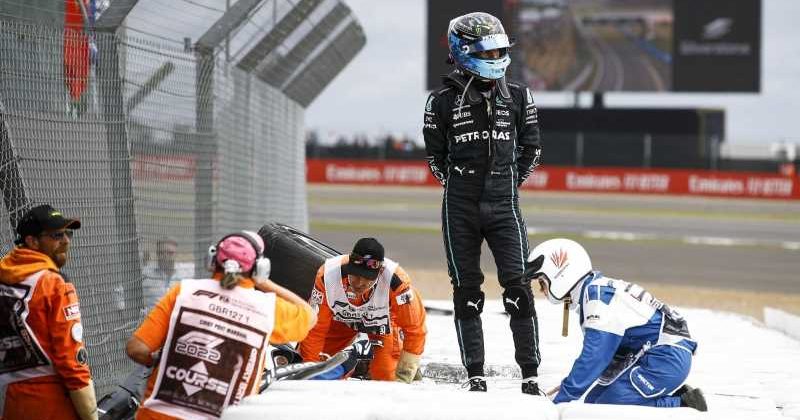 George Russell was left frustrated after he was blocked from restarting his home grand prix at Silverstone.

Russell’s car was carried back to the pits on the back of a flatbed truck after a three-car crash heading into the first corner at the start of the race.

The Mercedes car was clipped by Pierre Gasly before veering into Zhou Guanyu, causing damage to all three cars and sending the Alfa skidding upside down across the track.

The race was immediately red flagged as Zhou flipped over the barrier and Russell pulled off to the side of the track.

Russell said he got “swamped” by other cars and found he had no grip on the hard tyres.

“Firstly glad to see that Zhou is doing okay,” Russell told Sky Sports F1. “Obviously absolutely horrific incident. Ultimately we took a risk starting on the hard because I made the mistake in qualifying, we were starting out of position and we thought that risk gave us the best opportunity later in the race but there was just no grip whatsoever.

Gutted for you @GeorgeRussell63. But there will be many more home races ahead. pic.twitter.com/YUBrVxPBWb

“The hardest compound is cold out there. I got swamped by all the cars and the next thing I know got touched I was the side of Zhou and that was it.”

The British driver was seen exiting his car then running towards the crashed Alfa, as he went to help, the marshals recovered his W13, thus automatically retiring him from the race but Russell was adamant he could have driven it back to the pits.

During the red-flag break, Russell and his team were seen remonstrating with the FIA that he should be allowed to restart but their pleas fell on deaf ears.

“I jumped out of the car to see if Zhou was okay, I saw it was red flag straight away,” Russell said. “When I came back to the car, I couldn’t quite get it started for whatever reason. So I ran back to the team to check, I told the marshals to leave the car. And next thing when I got back, the car was on the back of the flatbed.

“Apparently as soon as you get assistance, you can’t restart so it’s very frustrating because the car just had the puncture. There’s no doubt we had the pace to come back to P6 today.

“They’re pretty adamant the FIA at the moment [of Russell not rejoining]. It’s one of those unique scenarios.”