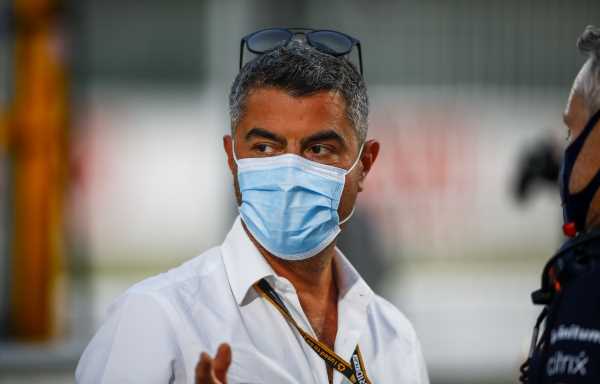 Gerhard Berger and Norbert Haug have praised the way in which Michael Masi handled things towards the end of the season.

The FIA race director has received a huge amount of criticism for the part he played in the outcome of the 2021 title fight which saw Max Verstappen overtake Lewis Hamilton on the final lap of the final race to prevail.

The Dutchman was largely able to do so as Masi instructed the five lapped cars between the two frontrunners behind the Safety Car to unlap themselves but didn’t allow other backmarkers to, ensuring the race wouldn’t finish behind the SC and Verstappen would be right behind Hamilton at the restart.

Mercedes felt this was in breach of the rules and launched two appeals before ultimately deciding not to take the matter to court, but the team remains furious with the Aussie.

Berger has defended him though, saying he set up the most exciting finish possible without doing anything illegal.

“He takes a pragmatic approach and tries to find solutions, but I don’t think he does anything that isn’t allowed,” the former driver told ServusTV.

The Austrian says Mercedes’ belief that the race would have to finish behind the Safety Car if cars were allowed to unlap themselves was wrong as regulations state the race director can decide to do things differently.

“And he decided differently, but not to help anyone, but to give the fans one last round in sporting terms to finish the fight,” he added.

“[He] handled the situation well, even if it meant bad luck for one side. For the fan, it’s the right thing to do, and he’s allowed to do it.”

Toto Wolff: "You need to reinstate the lap before, that's not right."

Masi has also been criticised for, in the penultimate race, offering Red Bull the chance over the radio to have Verstappen move back two places for a restart instead of sending the matter straight to the stewards.

Former Mercedes director Haug sees nothing wrong with this though and thinks it’s clever.

“I think this solution is quite fair,” he said.

“‘I will offer you to do that or you will force me to pass it on to the stewards. The stewards will then decide five or ten seconds [time penalty], but this way you have the opportunity to start again behind the Hamilton.’

“And I think that’s not trading, but an extremely clever move.”

On the whole, he says Masi has done a good job of replacing the late Charlie Whiting.

Anyone who follows in Charlie Whiting’s footsteps, no matter what his name is, has a hard time,” he added.

“Charlie Whiting grew up with Formula 1, with Bernie Ecclestone. First as a mechanic, then as chief mechanic. He was a great talent, a paragon of calm, poise and balance.”

“He [Masi] did quite well for that. I have never worked with him personally, but I was impressed by the cleverness and the many decisions he made.”