The biggest shakeup in General Motors’ racing program occurred quietly over the past few months, beginning with the move made by Mark Kent, director of GM racing, to a military defense position.

The press release: “Mark Kent, who was Director of Motorsports Competition, assumes the role of Director, GM Defense Facility Operations and will leverage his experience in the fast-paced motorsports world to support the rapid growth of GM Defense. He will be responsible for operationalizing the new GM Defense facility in North Carolina.”

Few of us thought of motorsports as a natural training ground for the military defense industry, but there it is.

Then, even more quietly, responsibility for the motorsports program was moved from under Jim Campbell, vice president, Performance Vehicles and Motorsports, to under mechanical engineer Jim Hentschel, GM Vice President, Global Safety Systems and Integration. Campbell retains his vice president title but will concentrate on the marketing side.

Then Doug Fehan was relieved of his duties as longtime head of the Corvette IMSA GT Le Mans two-car racing team, and replaced by engineer Laura Klauser, who had been working with the Cadillac teams in IMSA.

And finally, engineer Mark Stielow—better known outside the world of General Motors than he is inside because of his hobby, building a series of earth-scorching resto-mod Camaros that he ran in five One Lap of America competitions—essentially took Kent’s job, but with a different title: Director, Motorsports Competition Engineering.

Essentially Stielow gets IMSA, IndyCar and the NHRA, plus the ancillary series GM races in. Note that he doesn’t have NASCAR: That job went to Richard Childress Racing head of engineering, Dr. Eric Warren, who is now GM’s director of NASCAR programs. Both will work closely with GM’s new performance lab in North Carolina.

There’s more, but you likely get the idea if you counted up the word “engineer” in the above text. General Motors is aligning its racing divisions much, much more closely to the engineering side of GM—not just the motorsports engineering side, but the part of engineering that is also responsible for passenger cars. Everyone moved aside was replaced by engineers.

It sort of mirrors what Ford did when they put (engineer) Mark Rushbrook into the position of Global Director, Ford Performance Motorsports a few years ago. Rushbrook, like Stielow, a racer himself, has been pushing hard to make Ford racing relevant to Ford production vehicles. He is one reason the next IMSA WeatherTech SportsCar Championship Prototype car, the Le Mans Daytona Prototype hybrid (LMDh) has that “hybrid” attached, as will the next-generation NASCAR Cup car.

Don’t worry, it’s a mild hybrid that will be used to boost performance, not to make the cars compete on pure electric power. The 2021 Ford F-150 Hybrid is arguably the best example of that, with hybrid power that maximizes the truck’s ability and fuel mileage but doesn’t get in the way of a very well-designed gasoline powertrain. 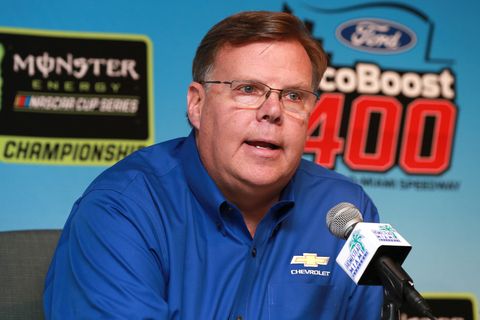 We spoke to Stielow, who is still wrapping his head around his new duties. He worked on the motorsports side back in the 1990s under Herb Fischel, but has been in and out of GM since, including a stint at Summit Racing. No one inside or outside GM will argue that Stielow isn’t familiar with performance at the highest level.

“We have a great team, a lot of legacy there,” he told Autoweek. He agrees that the moves are being made in order to give racing more of “an engineering focus.”

Several years ago, when Chevrolet’s racing programs seemed at an all-time low, I asked some senior executives at other car companies what they thought was wrong with Chevy. Several said it was engineering: That much of GM’s motorsports engineering work was being farmed out to suppliers such as Pratt & Miller, the company most responsible for the Corvette program.

That relationship will continue, Stielow said, but with more hands-on participation from General Motors engineering. Pratt & Miller “has been a partner of ours for over 20 years,” and that won’t change. “We’re just going to try and have a little bit more of an engineering slant on things.”

Stielow has a ton of experience on simulations, on designing vehicles and their components on the computer, and addressing hardware problems using software. It’s of critical importance now, he said, because motorsports “has been pushed a lot towards going virtual, especially in NASCAR, where they really cranked down on the amount of testing the teams could do, boxing these guys in on the number of tests and the amount of wind tunnel time they could have. It really drove a large need for simulation, so the simulation need on the race teams went way up, because we couldn’t physically go and test as much as we used to.”

Similarly, on the retail production side, “We’ve had a big push to try to get away from physical test properties and do it virtually. On my last job I was doing a lot of simulated engineering, running a group that, for example, ran all the calibrations on ABS modules. We’re really trying to leverage doing things in a virtual type of way, and in racing we’re having to go right off the trailer and onto the track.” In 2020, COVID-19 and its resulting limitations made that ever more important, and “made the engineering cycle much shorter and tighter. There are a lot of parallels on the OEM and the racing sides.”

That said, Stielow, a diehard car guy, does not for a moment discount seat-of-the-pants engineering, because he does that, too. “I can blind-drive two different shock absorbers and tell you the difference between the valving in the two of them. I’m a kind of the practical hands-on guy, and we have a great team at Milford,” which is the General Motors proving ground located north of Detroit.

Stielow has been having meetings with his race teams, and soon, “I’ll figure my way through this role.”

And yes, he’ll still be building those monster, street-cred Camaros on the side. Check out stielowengineering.com for a look.