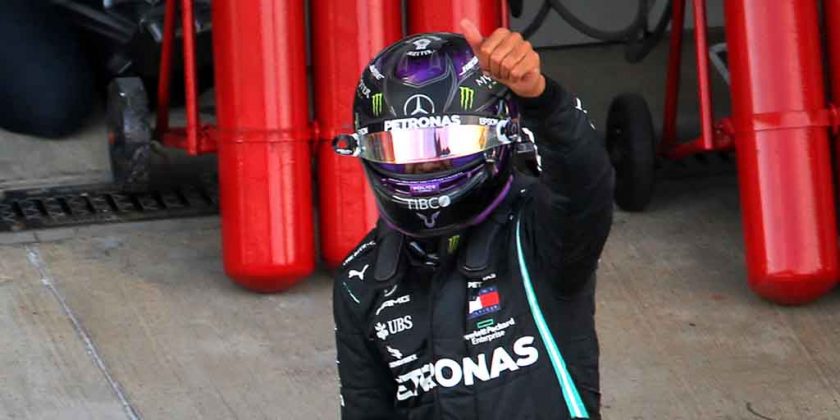 Lewis Hamilton clinched his 96th career pole position but did so in dramatic style ahead of the Russian Grand Prix.

Hamilton had a lap time deleted during Q2 and was told to come into the Mercedes garage for a fresh set of tyres rather than stay out for another early attempt.

But a crash from Sebastian Vettel caused the latest red flagged session in Formula 1 and left Hamilton with just over two minutes to begin his next Q2 lap once the session resumed.

Hamilton had to overcome traffic and running wide on his out-lap on cold tyres to make the cut-off point by a mere 1.25 seconds.

The six-time World Champion then had it all of his own way again in Q3 as he bagged pole position by half a second to Max Verstappen, who managed the split the two Mercedes.

However, Hamilton’s Q2 headache means he is forced to start on the soft tyres with both Verstappen and Valtteri Bottas on the mediums and ready to slipstream their way past down the long, long dash to Turn 2.

“It was one of the worst qualifying sessions, it was horrible,” Hamilton said in the immediate post-qualifying interviews.

“Heart in your mouth the whole way. The first one [Q2 lap] I had the time taken away obviously which was the first time I’ve gone wide at the final corner the whole weekend and I wanted to stay out to do another lap and get a banker in.

“But I was told to come in and get new tyres and then the red flag came out. It was a real risk once we got out on that next tyre at the end and ultimately I’m starting on the soft tyre which is not good.

“Both the cars I’m racing against are on the medium tyres so it will definitely make it hard to win the race.

“But I’m definitely going to stay positive and try and figure out how I can navigate through and get a good start.