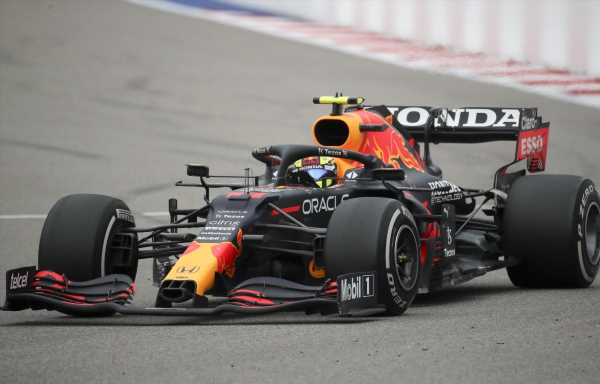 Despite dropping down the order in the late chaos, Sergio Perez is pleased with his “promising” performance at the Russian Grand Prix.

At one point in the race at Sochi, Perez looked to be in contention for victory after doing a long first stint on the hard compound tyre.

Rather than rejoin in P3 on fresh mediums though, he ended up coming out of the pits in P5, but the Mexican managed to quickly pass Daniel Ricciardo. At that point, P3 still looked achievable. And then came the rain.

Like Lando Norris, Checo decided to risk staying out on slicks rather than pit early and it proved costly, with the track getting too wet and the Red Bull man ultimately dropping down to the bottom of the points-scoring positions after eventually coming in.

While the result was a disappointing one though, he’s encouraged with how he performed.

“We were on for a great result with a podium through pure merit,” he said afterwards.

“And despite a slow pit stop we still managed to come through the field to third but sometimes this is how racing is.

“The issue with the stop wasn’t a human error and I spoke with my pit crew after the race to check they were okay because we’re obviously all disappointed.

“As a team we still walk away with a lot of points today and yes, it is frustrating for me, but I feel like I got so much out of the car which is only promising going to Turkey in two weeks’ time.”

Red Bull opted to leave the decision as to whether or not to pit when it started to rain to their drivers, with Perez choosing not to do so and Max Verstappen coming in.

The Dutchman’s call proved to be the right one as he climbed up from P7 to P2 in the closing stages.

Perez says he didn’t do the same as he was worried the circuit would dry up.

“We were on for a podium so I decided to take the risk in staying out on the slicks instead of pitting for inters,” he said.

“In the first and third sector it was pretty dry and you could get temperature into the tyres, so if it then dried up those of us on the slicks would have made it work and those on the inters would have seen their race destroyed.

“In hindsight the slick wasn’t the right tyre and ultimately the timing of the rain in the race meant some people got lucky and others didn’t.”

While Perez views it as a matter of luck, Christian Horner simply thinks his driver made a mistake.

“You can be a hero or not in the end. It’s a difficult decision,” said the team principal.

“Max made the right decision and did it well. Checo decided to stay … thinking he could get over it and that was a wrong decision. It could have been for anyone.”