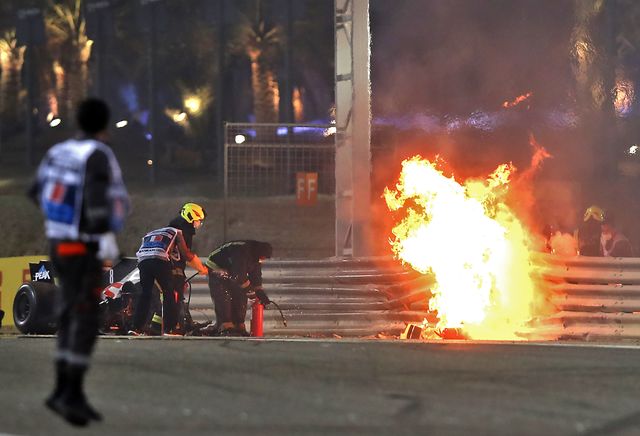 Haas F1 Team driver Romain Grosjean says that he is happy to be alive and that he wants to get into a Formula 1 car and race in the season-finale at Abu Dhabi on December 13 “to finish my story with Formula 1 in a different way.”

Grosjean, 34, escaped serious injury in a spectacular crash on the first lap of the F1 Bahrain Grand Prix on Sunday.

The Frenchman spoke to the French TV channel TF1 on Tuesday about his crash in Bahrain.

“It is something that will mark my life forever,” he said. “I have a lot of people who have shown me love and it has touched me a lot, and at times I get a bit teary-eyed. I don’t know if the word ‘miracle’ exists or if it can be used, but in any case I would say it wasn’t my time.”

Grosjean did not black out at anytime during the crash episode. It took Grosjean 28 seconds to free himself from his car and escape the inferno caused by the impact with a steel barrier.

“I didn’t lose consciousness,” he said. “To get out of the chassis, I was able to undo my belts. The steering wheel was no longer there, it probably came off in the impact. But it felt a lot longer than 28 seconds. I saw my visor turning orange, I saw the flames around me. I thought about a lot of things, including Niki Lauda, and I thought that it didn’t want to end up like that. I couldn’t finish my story in Formula 1 like that.

“And then, for my children, I told myself that I had to get out. I really saw death coming. In the end, my hands were burnt and I had a big sprain, even though I thought I had broken my foot. I was afraid for my relatives, my children mainly, but also my father and my mother, I was not really afraid for myself.

“I saw death coming, I had no other option but to get out of it. I tried to get out of the cockpit three times. After this accident, I am happy to be alive. My 5 year old son Simon is sure I have magical powers, he spoke of a magical love shield. These are very strong words from children. My big one—7-year-old Sacha— is more rational. He’s trying to figure out the accident. And the youngest one made me a drawing. It’s going very well given the accident and the circumstances.

“I have Mickey (Mouse)’s hands (because of the bandages) but otherwise it’s fine. It’s not fun but it’s not painful, so I’m not complaining.”

A heart-stopping moment on Lap 1 in Bahrain

Have you ever seen anything quite like Grosjean’s great escape in Bahrain? Check into the comments below and share your most memorable crash story.