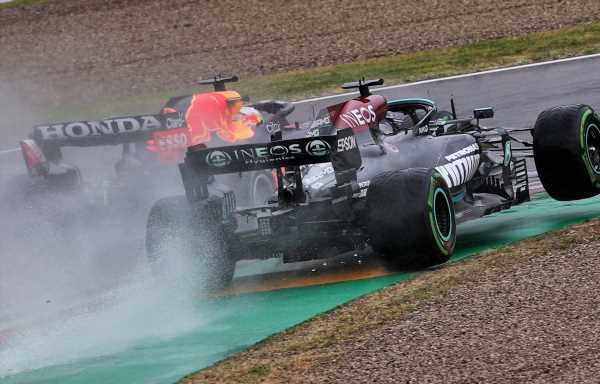 Losing the lead to Max Verstappen into Turn 1 at the Emilia Romagna Grand Prix created a “little bit of a crisis” for Lewis Hamilton, says Damon Hill.

Hamilton had, by his standards, a scruffy Sunday at the Imola circuit.

Although he started from pole position ahead of the Red Bull drivers, he was P2 after Turn 1 as he came off second best in his early tussle with Verstappen.

Starting in the wet, Verstappen, who had been P3 on the grid, was quickly up alongside Hamilton and had the better line into Turn 1.

As Verstappen held his track position, Hamilton was forced to mount the kerbs, losing a bit of his front wing and the lead.

That, Hill reckons, put Hamilton firmly on the back foot.

The art of licking the stamp, and sending it 📮

“It set up a little bit of a crisis for Lewis Hamilton,” the former F1 World Champion said during the F1 Nation podcast.

“I think he probably expected to be threatened more by [Sergio] Perez on his right but actually it was Max who was extremely brave off the line, who actually put a wheel right on the very edge of the track.

“However, he kept his foot in it and got alongside Lewis going into Turn 1 and then forced Lewis to go around the outside. I was watching that and I have to say I was thinking ‘Lewis, no, no, no, not there’.

“I think he should have conceded the corner because I think it was quite clear Max had the inside line, and it was inevitable Max was going to use all the track and Lewis had nowhere to go but over those great big rumple strips or sausages, the bumps they put on the kerb.

“That damaged his front row and really put him on the back foot for the whole of the rest of the race.”

Hamilton would go on to make a second mistake later in the race, sliding off the track and into the gravel, falling down to ninth place.

He recovered to finish second, holding onto the lead in the Drivers’ Championship by a single point ahead of race winner Verstappen.

“What we are seeing now is the opening testy moments that will build over the season, scoring little points off each other,” Hill added.

“Max won that one. He not only won the race but the first corner and the start and Lewis came off slightly worse.”