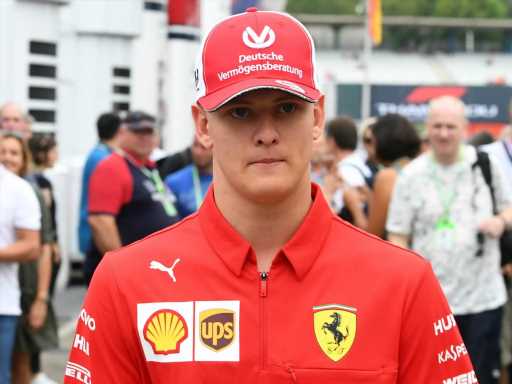 Such has been the German’s consistency that he enters the final two rounds of the campaign on a 12-race scoring streak.

His performances in Formula 2 have earned him a Formula 1 run with Alfa Romeo at this weekend’s Eifel Grand Prix.

The 21-year-old will drive the C39 in Friday’s first practice.

“I am very happy, the whole racing world is very happy. It is remarkable to have the Schumacher name back in Formula 1 after such a long break,” Haug, a former Mercedes team boss, told RTL.

“If I had something to say in Formula 1, as a Formula 1 maker, then I would not miss this opportunity,” he added.

“For me it’s imperative that Mick get a seat and not because he’s being leveraged in there, but because he really deserves it.

“I think it is very, very important that he is not promoted because of his name, but because he has performed in Formula 3 and Formula 2.”

The 67-year-old reckons Schumacher is the “perfect racing driver” as he “doesn’t flinch for a long time, he puts his opponent in order. There will rarely be any contact.”

He added: “He gives his answers on the track and he also prefers to do it like that.”

Expected to sign with Alfa Romeo for next year’s championship, the World title is not something the youngster will be aiming for in his first season but Haug feels there could be one, or even more, down the line.

“It is far too early to speak of a Formula 1 title,” he said.

“But if I should make a statement today: I think he can have a great career in Formula 1 with the right team, and the right material.”

According to reports in the Spanish media, Alfa Romeo could confirm Schumacher as early as this Friday.

The German is expected to be named as Kimi Raikkonen’s 2021 team-mate with the Finn re-signing for another season.

🚨 Mick Schumacher will be announced as Alfa Romeo driver for the 2021 season this Friday, before FP1. His teammate will be Kimi Raikkonen and a one-year contract for both drivers is ready.